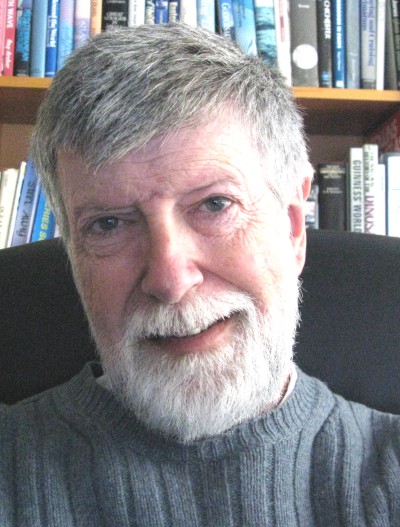 Born in the Caribbean nation of Grenada West in 1948, Grahame Shannon of North Vancouver is an avid sailor who immigrated to Canada with his parents as a child, later moving to Vancouver in 1967. Married with two children, he has worked for a BC software company and helped as a boat designer to create more than a hundred boats of all sorts, including the widely-known Walker Bay 8 dinghy.

Grahame Shannon's first novel, Tiger and the Robot, begins with the annual Swiftsure Yacht Race in the Strait of Juan de Fuca. Described as a rollicking adventure-mystery with an AI (articifical intelligence) heroine, the story arises from the abduction for ransom of Gina Lee, an Asian billionaire. The search and rescue mission centers upon Chandler Gray, a software geek who lives on a sailboat and who has had a chance encounter with the abductee. Chandler develops an artificial intelligence detective, activated via a phone app, named Saga (pronounced Say-gah). An antique seaplane flies them to the Aleutian Island; an ancient Land Rover is used to explore remote areas of Vancouver Island. The climax of Tiger and the Robot occurs in Desolation Sound. Available in paperback or ebook from Amazon and Kindle.

Shannon's second novel Bay of Devils is based on the 1918 Princess of Sophia disaster, known as the 'Titanic of the West Coast.' The story begins with a letter tossed overboard the doomed ship. In 1968, the letter is found by waitress Cindy Lu in her father's effects. She manages to deliver it to the original recipient who lives in the West End. This sets in motion a chain of events that culminate in an expedition to Thomas Bay, Alaska -- the fabled Bay of Devils.