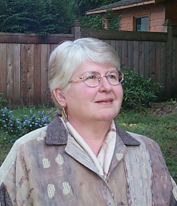 
Vanessa Grant claims sales of more than ten million copies of her romances in 15 languages, qualifying her as one of B.C.'s bestselling novelists. She lives with her husband, an Irish setter and a cat named Zorro. They settled on one of the Gulf Islands after a two-year sailing trip to Mexico. She also works as a freelance editor.

AWARDS: Under the Covers Award for Best Writing Book, 2001


The Romance Writers of America Rita Award for best contemporary romance of 1996 has been won by Naomi Horton for Wild Blood. The Nanaimo writer's formulae for success includes a proviso that heroes and heroines must have a PMF -- a prime motivating force -- which affects their every move.
"For the sake of your story," Horton says, "this PMF will have stemmed from a single, dramatic event in the character's past, the prime motivating event (PME)."

PMF and PME are terms found in the new how-to guide, Writing Romance (Self-Counsel $15.95), by Vanessa Grant of Gabriola Island. Grant and Horton are friends who frequently consult one another about their work.
Vanessa Grant -- whose real name is Vanessa Oltmann -- wrote 50 pages of a love story when she was bedridden at age 12. She later completed three unpublished novels while living on a lighthouse station when her children were babies.

Her big break came in 1984 with the Harlequin publication of her first romance, Pacific Disturbance. She was approached to produce Writing Romance by editor Ruth Wilson after completing 25 Harlequin novels with more than nine million copies in print.
Another member of the Vancouver Island Chapter of the Romance Writers of America, Jo Beverley of Victoria, has four Rita statuettes to her credit. The Chapter will be hosting a Romance writing conference at the Empress Hotel in March, 1988.
1-55180-096-9