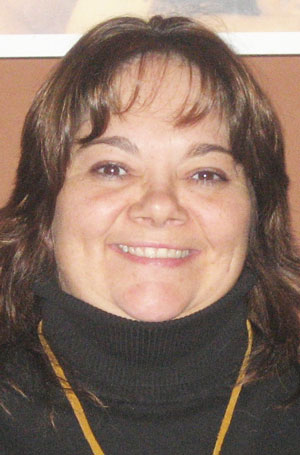 
Monique Gray Smith is a mixed-heritage woman of Cree, Lakota and Scottish ancestry and a proud mom of twins. Under the umbrella of her own business, Little Drum Consulting, she works as a consultant, writer and international speaker. Having been sober and involved in her healing journey for more than twenty years, she published her fictionalized memoir, Tilly: a Story of Hope and Resilience (Sono Nis Press 2013) and won First Prize in the Burt Award for First Nations, Métis and Inuit Literature in 2014. The memoir recounts how she was able to overcome her parents' divorce, the loss of her grandmother, substance abuse, and fear of personal failure to discover more about her culture and herself. Through her writing she hopes to "help shift paradigms and perspectives of us as Indigenous peoples in Canada. I am always in awe of the strength of the human spirit."

Walking barefoot on grass. A hand to hold. Bannock baking in the oven. These are ways to find happiness as discussed in her board book for small children, My Heart Fills With Happiness (Orca $9.95), illustrated by Julie Flett. It was written to support the wellness of aboriginal families in particular but applies to all children.

Monique Gray Smith lives with her family on WSANEC territory in Victoria.

Some of Monique Gray Smith’s favourite topics include resilience and reconciliation. Her background is Cree, Lakota and Scottish and she has written several books covering reconciliation including her latest title When We Are Kind.

According to the book’s back notes, Smith’s aim was “to prompt a dialogue among young people, their care providers and educators about kindness and the importance of the connections children make with their friends, classmates and families.”

Gray also shows how receiving kindness brings positive results: “I feel loved when my Elders are kind to me.”

Articles: 2 Articles for this author
Tilly and its Precedents
Review (2013)


Has anyone noticed? we've had a flurry of books solely about the lives of individual First Nations women of B.C.-four in the same year-including Monique Gray-Smith's under-publicized Tilly (Sono Nis $19.95).

It wasn't always thus. Here are ten predecessors from the past thirty years.

1. Cariboo resident Jean Speare broke new ground when she interviewed her Shuswap neighbour, Mary Augusta Tappage, born in Soda Creek in 1888, and produced The Days of Augusta, in 1973, but there were only a few follow-ups.

2. Raised in North Vancouver, Lee Maracle, of Salish and Cree ancestry, is a member of the Stó:lo First Nation who produced a synthesis of autobiography and fiction, Bobbi Lee, Indian Rebel, in 1975, followed by I Am Woman, in 1988, which recounts Maracle's struggle to "climb the mountain of racism.";

4. Pauline Johnson ("Tekahionwake";) only resided in Vancouver for four years. Betty Keller's biography Pauline, first appeared in 1982. An edited version for young adults was issued in 1999.

5. Social worker Bridget Moran published Stoney Creek Woman, about the life and times of Carrier elder Mary John, in 1988, and for many years it was the bestselling title published by Arsenal Pulp Press.

6. With Chiwid in 1995, Cariboo journalist Sage Birchwater profiled the remarkable Tsilhqot'in woman who lived outdoors for most of her adult life, having escaped from a violently abusive husband, Alex Jack. Widely known as a crack shot, Chiwid (or "Chickadee";) moved her solitary campsite according to the seasons, protected only by a tarp. Chiwid was born as Lily Skinner, daughter of deaf and mute Luzep, a Tsilhqot'in from Redstone, and Charley Skinner, a white settler in the Tatlayoko-Eagle Lake area.

8. Having grown up hearing stories about her mother's great aunt, Mourning Dove, Jeannette Armstrong spearheaded the En'owkin Centre in Penticton for First Nations writers. Her second novel, Her Whispering in Shadows, in 2000, can be read as a companion novel to her first, Slash (1983). It follows the life and times of Penny, an Okanagan artist and single mother who has contracted cancer after her exposure to pesticides while working as a fruit picker in the Okanagan Valley.

9. Shirley Sterling retold her experiences in the Kamloops Residential School for an Egoff Prize-winning children's book, My Name is Seepeetza, in 1992.

10. In 2004, the first autobiographical portrayal of a Kwakwaka'wakw matriarch, Paddling to Where I Stand, recalled the life of storyteller Agnes Alfred, co-written and translated by Daisy Sewid-Smith and Martine J. Reid.

In 2013, BC BookWorld provided feature reviews of Standing Up with Ga'axsta'las: Jane Constance Cook and the Politics of Memory, Church, and Custom (UBC Press, 2012), co-written by Leslie A. Robertson and the Kwagu'l Gixsam Clan, and Chief Bev Sellars' autobiography, They Called Me Number One: Secrets and Survival at an Indian Residential School (Talonbooks 2013).

Like her protagonist named Tilly, Gray Smith grew up knowing she was part Lakota on her dad's side-but she didn't know her mother was Cree. After she learns the truth from a bizarre encounter in the street, Tilly becomes unglued and turns to alcohol in her teens, first introduced to booze by a seventh-grade schoolmate, Abby.

Like the author's mother, Tilly's mother was a Cree who was taken from her parents as a baby. The death of Tilly's beloved grandmother, her mentor, who has passed along traditional teachings to her, is like the loss of lifejacket in the water. Tilly drowns in despair and partying. She can only summon the courage to swim to safety, to revive her self-esteem, when a stranger says to her, "Never question who you are or who your people are. It's in your eyes. I know it's in your heart.";

Tilly: A Story of Hope and Resilience is not only an inspirational and sometimes humorous account of attaining sobriety. Gray Smith also offers a matter-of-fact panorama of social hurdles faced by Canada's First Nations in the 21st-century,
Now a proud mom of young twins, Monique Gray Smith lives "on Coast Salish territory"; in Victoria, B.C. where she operates Little Drum Consulting. Sober for more than twenty years, she is an articulate spokesperson and writer who was invited to contribute to the proceedings of the recent reconciliation conference at UBC. Tilly 978-1-55039-209-8


Iillustrated by Danielle Daniel, You Hold Me Up (Orca $19.95) by Monique Gray Smith aims to foster empathy and respect among young people, their care providers and educators. It encourages children to show love and support for each other and to consider each other’s well-being in their everyday actions.