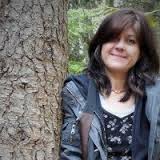 The story begins with the vanishing of a young rockabilly singer named Kiera in northern B.C. In Greenaway's foreword she says the story is told from the perspectives of Leith and his temporary constable Dion. The police set up shop in the small police detachment in New Hazelton and live across the street in the Super 8 Motel.

"Leith is based on men I know, a composite of wit and cynicism and doggedness, along with a delightful array of flaws," she writes. "I take Dion's sense of solitude and vulnerability from my own years working as a court reporter in the Smithers/Hazelton, Terrace area. I have put in my share of miles along that highway. I've lost control of my car on icy roads, been trapped by a blizzard in that same motel, and often stood awestruck, like Dion, at the beauty of the North."

The second book in the series Undertow (Dundurn 2017) brings detectives Leith and Dion together in Vancouver as they seek to solve the murders of a mother, father, and baby. In book three in Greenaway's B.C. Blues Crime series, Creep (Dundurn 2018), the two investigators in North Vancouver are mystified by a mauled body on the North Mountains--and a small boy is attacked and bitten by a man in wolf form. Constable David Leith follows procedures while out-of-the-loop and rebellious Constable Cal Dion asks an attractive witness out on a date... It's dark in them thar hills.

Rachel M. Greenaway made her debut as an author at the first annual CUFFED Crime Writers Festival program (March 11-13, 2016 at Performance Works on Granville Island).
BOOKS