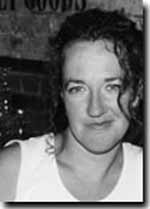 
Leslie Greentree's second book of poetry entitled go-go dancing for Elvis (Frontenac House, 2003)was nominated for the 2004 Griffin Poetry Prize. It's about a beautiful sister, who tours in the U.S. as a dancer for an Elvis impersonator, and a conventional sister, who stays home and renovates her house. "It's a story of love, jealousy, betrayal, and the people who used to have our phone numbers," according to the promotional material. "Most of all it's a story about Hawkeye Pierce and power tools."

Her first book entitled guys named Bill (Frontenanc House, 2002) was part of Frontenac's poetry series called Quartet 2002. In 2004 Greentree was working in Alberta at the Red Deer Public Library as the Marketing Assistant and as an Information Services Assistant. Born in Grande Prairie, Alberta, she has lived in various parts of British Columbia including Salmon Arm, McBride and Dawson Creek. She has also lived in the Crowsnest Pass, Calgary and Lethbridge.