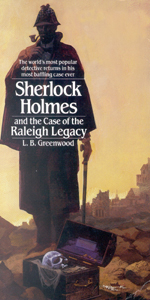 Articles: 1 Article for this author
Sherlock Holmes and the Case of Sabina Hall
Article


IN VANCOUVER, SERIOUS SHERLOCK HOLMES addicts can join a fledgling society called The Stormy Petrels of B.C. In Calgary, they have The Singular Society of the Baker Street Dozen. Conan Doyle devotees in Toronto, Halifax, Montreal, Saskatoon and Edmonton can belong to affiliated chapters of The Bootmakers. And in Winnipeg they have The Great Herd of Bisons of the Fertile Plains. These diverse Holmes societies favour two authors. One is Sir Arthur Conan Doyle, who invented Holmes and the faithful Dr. John H. Watson 101 years ago. And the other is a 49-year-old heir apparent to Conan Doyle's literary legacy of 56 short stories and four novels, Lillian Bethel Greenwood.

Her first Holmes resurrection involves an unsigned Elizabethan letter that links a derelict estate to Sir Walter Raleigh. The second is a murder mystery in a snowbound, isolated mansion called Sabina Hall, owned by a blackhearted mining mogul. "Holmes' attraction, I think," says Greenwood, '1ies in the fact that he and Watson are so totally gentlemen, that they exist in a world in which that phrase meant so much.

"I short, they're quality. They would not appear on Johnny Carson and they would never watch Dynasty. They would be more than a mite puzzled by our fascination with such displays." Conan Doyle would have approved of the roundabout but logical path Beth Greenwood took to emulating his dense, typically Holmesian cases.

Confined to bed with respiratory problems as a child, Greenwood read all of Dickens' work, commencing with Oliver Twist. After completing high school, mostly by correspondence, she left the Okanagan for creative writing courses from Earle Birney at UBC, then pursued a PhD from University of California in Santa Barbara.

While unable to rent her California cottage and make her annual return to Kelowna, Greenwood passed the time by enrolling in an adult education class about the mystery novel. "It turned out to be incorrectly advertised," she recalls, "Instead it was about writing the modem Gothic novel. Ugh! The course eventually collapsed but I started a manuscript.

"I was incredibly lucky to obtain the tireless services of my agent, Knox Burger of New York. He sold that first ghastly yarn to a little company that paid me a $500 advance and then went broke. The story really wasn't very Gothic at all, though it did have a nice castle in it."

Greenwood burned the evidence and tried her hand at an Oliver Twist tale. Street Sparrows, published in hardcover when she was 46, is an out-of-print adventure/romance strong on Victorian street life.

"Then one day I saw a cheap little novel called Sherlock Holmes Meets Dracula," she says, "and I thought it must be a joke. It was atrocious. There was no attempt to match Doyle's style." Partly as a challenge, Greenwood researched the Doyle canon, analysed the boundaries (no sex, no politics) and carefully duplicated the Doyle style in the Raleigh Legacy. Reviewers from U.S. publications such as Playboy, Publishers Weekly and Kirkus Reviews have lauded the results.

"It is exactly the sort of faithful, straightforward; entertaining Sherlock Holmes mystery we like to see," wrote Jon L. Lellenberg of the Conan Doyle Estate.
"I am bored with most of the terrible pastiches that have been done," wrote lecturer John Bennett Shaw of the Doyle Estate Committee, "But this one is exceedingly well written, neither Holmes nor Watson's character is violated."

Back living in Kelowna, L.B. Greenwood mostly writes while propped up on her bed (a habit left from her correspondence courses as a convalescent), sometimes working ten hours at a stretch, sometimes not working at all, but always treating her two distinguished characters with the respect that two great gentlemen deserve.

There are now 243 Holmes clubs worldwide, one Sir Arthur Conan Doyle and one L.B. Greenwood. Holmes would conclude the popularity of L.B. Greenwood's novels is therefore, in a word, elementary. Although, truth be told, Sherlock Holmes never said, "Elementary, my dear Watson, elementary," in any of the books. That phrase emerged from adaptations for film.