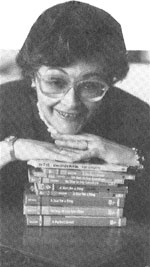 
Born on July 23, 1938 and educated in England, Gregory is one of Canada's foremost romance authors. She arrived in Vancouver on September 10, 1956 and moved to Victoria as a teenager. There she met her husband at a dog club banquet. After marriage, she lived in Winnipeg, Thunder Bay and Vancouver before settling in Richmond in 1965. She has two grown sons, and over the years has cohabited, more or less willingly, with dogs, hamsters, gerbils, rats and ferrets. Up until 1986, when she sold her first book, Kay's principle career was changing jobs. "You name it," she says, "if it was boring, I did it." Now, after publishing more than 25 romances, she doesn't plan a career change. Her favourite author is Jane Austen. "I fell into women's fiction / romance writing by accident," she says. "I thought I was writing suspense."

A marathon runner and a mother of five, Hutchinson, born in Elk Valley, B.C., initially pursued a career as a freelance writer but was dissatisfied with the low pay.

"Then I blundered onto a TV show which interviewed Janet Dailey, one of romance's leading writers. By God, she made money," she recalls.

Hutchinson read 150 romances before she wrote and published Sheltering Bridges, a set-in-B.C. story about a Kootenay mining magnate, his deaf son and a virtuous tutor on a ranch near Fernie.

Her second romance, Wherever You Go, was a tribute to Vancouver as a city. "It had scenes in all my favourite places the Varsity Grill, the Only Seafood cafe, behind the Museum of Anthropology, Schwartz' Deli near the Army & Navy, Spanish Banks. 'Then Harlequin phoned. They loved it. But could I change the setting to Seattle? Margaret Laurence would have hung up the phone in their ear. But I sacrificed True Art to Mammon.

She credits part of her eventual success to an influential course she took five years ago from local writing instructor Basil Jackson. "I thought I was writing suspense!" she recalls, 'Then an editor at Berkeley-Jove sent back a manuscript with a note suggesting I try their romance line, Second Chance at Love.'

Gregory's fourth manuscript and first book, A Star for a Ring, was published in 1987 by Mills & Boon, the British giant of romance fiction that views an estimated 5,000 unsolicited manuscripts per year. The novel came to North America as a Harlequin Romance in 1988 and has appeared in Holland, Australia and elsewhere.

In just two years Gregory has had seven books accepted, her eighth is finished, and her ninth is underway.