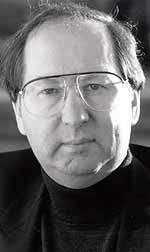 
Paul Grescoe and Audrey Grescoe of Bowen Island were once primarily known as magazine writers and editors. Now he's a man of letters and she's a woman of letters. They've pondered a preponderance of private letters dating back to the founding of Canada for an anthology of correspondence, The Book of Letters (MWR, 2002), followed by The Book of War Letters (M&S, 2004) and The Book of Love Letters: Canadian Kinship, Friendship and Romance (M&S, 2005). Individually they've produced a variety of books in recent years, including Paul Grescoe's two mysteries about his detective named Dan Rudnicki, including Flesh Wound (D&M, 1991). Together they produced an Alaska cruise guide. One of Paul Grescoe's earliest works was a biography of multi-millionaire Jimmy Pattison called Jimmy: An Autobiography (Seal-Bantam, 1987). Pattison and Grescoe originally wanted their book to be called You Gotta Wanna, a characteristic Pattison expression, but their Toronto publisher vetoed the idea. The mostly flattering portrait of Pattison was seen by many as a counterpoint to a 1986 paperback bestseller by Russell Kelly called Pattison: Portrait of a Capitalist Superstar (New Star). Grescoe has described himself as a small-l liberal. His son Taras Grescoe has risen to prominence as a non-fiction writer at the start of the new Millennium.