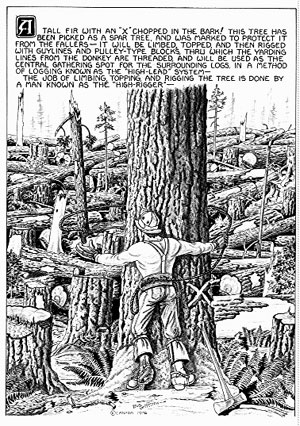 Born in Moose Jaw in 1913, Bus Griffiths was raised in Vancouver and came to live in Fanny Bay in 1944 from Port Coquitlam where he had been logging on Burke Mountain. He worked for decades in the logging industry, primarily as a faller, and he gained an understanding of all aspects of the process. "The last falling I did was in '72, when I was 64 years old," he told Grant Shilling of Georgia Straight. After Griffiths made an eight-page comic pamphlet for children during World War II, an editor at BC Lumberman magazine encouraged him to submit comic strips about logging. His wife Margaret encouranged him to continue drawing, sometimes serving as his artist's model, as Griffiths perfected his method of working first in pencil, then in India ink.

Now You're Logging (Harbour, 1978) is his comic book styled novel about two young men, Al Richards and Red Harris, learning truck-logging during the Dirty Thirties from a tough camp boss, Art Donnegan. With its attention to detail and authenticity, this one-of-a-kind history has been reprinted with an introduction by Jack Hodgins (who grew up in Griffiths' neck of the woods, north of Fanny Bay at Merville).

Griffiths also illustrated the children's book, Patrick and the Backhoe, and eight of his logging scenes are permanently on display in the Courtenay Museum and at the Fanny Bay Community Hall. His work illustrates Bush Poems by Peter Trower, who used to read Griffiths' comic strips when he was growing up on the Sunshine Coast. A 35th anniversary version of Now You're Logging was released by Harbour Publishing in 2013.

Review of the author's work by BC Studies:
Now You're Logging

Patrick and the Backhoe (Nightwood 1991) a children's book written by Howard White, illustrated by Bus Griffiths.


G.J. "Bus" Griffiths, author of the BC classic Now You're Logging (Harbour Publishing, 1978), passed away in Courtenay on September 25, 2006. Griffiths was admitted to extended care after suffering a stroke three and a half years ago and had been slowly declining since. There will be a memorial service at the Union Bay Church on Saturday, October 21 at Ipm and a reception at the Fanny Bay Community Hall at 2pm.