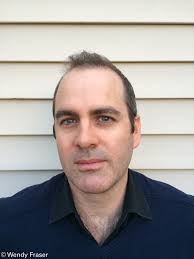 
Originally from Brisbane, Australia, author Darren Groth moved to Vancouver in 2007 with his Canadian wife and their then five-year-old twins.

His work has been published on both sides of the Atlantic. A former special-education teacher, Groth promotes awareness and understanding of autism spectrum disorder (ASD) and is the father of a son with ASD.

Are You Seeing Me? is Groth's novel about twins Justine and Perry on a road trip in the Pacific Northwest. [SEE REVIEW BELOW] Justine has always been responsible for her brother who has ASD. But that is about to change as Perry has been accepted into an assisted-living residence. Before the two are separated, they decide to take go on an adventure together.

Shortlisted (with brother Simon) in The Text Prize of Australia for Concentrate, August 2009

Book of the Month at Booktopia for Kindling, July 2010

Book of the Month in Notebook Magazine for Kindling, August 2010

Selection 'Best Reads of 2012? in Reading Rewards for Kindling, December 2012

Book of the Month at Riverbend Books for Are You Seeing Me?, August 2014

Bookseller's Pick at Abbey's Bookshop for Are You Seeing Me?, August 2014

Outstanding Book in International Board on Books for Young Adults' (IBBY) Collection for Are You Seeing Me?, January 2015

Shortlisted, Children's Book Council of Australia 2015 Older Readers Book of the Year for 'Are You Seeing Me?', April 2015

Shortlisted, Sheila A. Egoff children's literature prize for 'Are you seeing me?', March 2016.

The Procrastinator, published by Jacobyte Books, November 2000 and by Poseidon, April 2006

The Articulate Conception, published as The Umbilical Word by IP, June 2008 and by Exciting Press, December 2013

Kindling, published by Hachette, July 2010 and by Exciting Press, April 2013

Articles: 2 Articles for this author
Are You Seeing Me?
Review 2015


ASD brother, where art thou?

"What is it about sea monsters?"; nineteen-year-old Justine Richter asks her twin brother. "Why are you into them so much?";

The twins are in the Okanagan, about to fulfill one of Perry's dreams-on the lookout for Ogopogo.

Any reader who has been paying attention will realize that high functioning, autistic Perry is describing himself.

As a child born with Autism Spectrum Disorder (ASD), unlike his sister, Perry is subject to 'inappropriate behaviours' and he has problems mixing with people.

To further complicate matters, for over a year, since their father's death, Justine has been his sole caregiver. Their mother left them when they were four.

That's the set-up for Darren Groth's engaging and heartfelt Are You Seeing Me? (Orca $19.95).

Thanks to their father's life insurance policy, the twins have made their first plane trip from their Australian home to meet up with their mother, now living in Vancouver. The mother and her other daughter have nervously awaited the visit. Perry is unaware of the tension. He mostly wants to see Ogopogo.

Perry is also passionate about Jackie Chan movies and earthquakes. He is rarely without his earthquake monitoring equipment: a portable seismograph, notebook, and seismometer that come out whenever he feels uneasy.

Perry is uneasy often. Like when they're going through Canada Customs. Justine has learned how to cope with her brother's volatility. But she is not dealing so well with a very new problem: Perry says he wants to leave her and go into the independent specialized housing.

Their father had started researching a care facility for Perry before his death. Justine is perplexed: Is her brother doing this for himself? or for her?

The only hint that this enjoyable and engaging novel is written for young adults comes towards to the end. Plot rules, plausibility not so much. While 'Saint' Justine is sometimes too good to be true, her twin brother is an intriguing, wise, and ultimately lovable character.

"He was a joy to write,"; says Groth, "much easier than his 'normal' sister. There's a certain fictional freedom that comes with exploring the mind of a unique person. I wanted to produce an authentic voice for the story and be honest to the characters and their circumstances.";

Groth says the original manuscript took about a year to write. Most of the research he had to do was not about Autism Spectrum Disorder but about earthquakes, Ogopogo and Jackie Chan.

"Following the publication of my previous novel, Kindling,"; he says, "I started playing with the ideas that would become Are You Seeing Me? It all hung around in my head for a couple of months before I started to put words on the page.";

A former special education teacher and the father of a son with ASD, Groth had previously taught several children with ASD. "It was a real life-shaping experience,"; he says, "and, as Fate would have it, quite a useful preparation for being a parent.";

Groth's own twins are now 14. On his website [Darrengroth.com] Groth smiles with his son as they both hold up a sign that reads: "We need DiverseBooks because disability is too often portrayed in fiction as 'other' rather than 'another.' ";

In an interview with BCBW, Groth articulated the underlying message of Are You Seeing Me?

"Don't subscribe to the whole 'perception is reality' myth. For people like my son and Perry, the distance between assumption and truth can be huge, so avoid snap judgments and instant opinions. If you can do that-if you can pause, wait, pay attention-you might notice a reason or hear an explanation. And you'll be a better person for it, guaranteed.";

Originally from Brisbane, Australia, Darren Groth moved to Vancouver in 2007 with his Canadian wife and their then five-year-old twins. Are You Seeing Me? has also been published by Random House Australia.


REVIEW: Munro vs. The Coyote

Sixteen-year old Munro Maddux has been having a rough time. Ever since the sudden death of his sister, he has been angry, depressed, and confused. Even worse, he can't seem to get rid of the horrible voice in his head -- the one he calls "The Coyote.";

The Coyote's cup is always half-empty, and every time Munro takes a step toward healing his broken heart, the Coyote is there to tell him not to bother. After all, he's really just a loser. And let's face it: he's partly to blame for Evie's death.

Grief-stricken and at a loss as to how to help their son, Munro's parents decide to send him on a six-month student exchange to Brisbane, Australia, hoping a change might do him good. Munro isn't exactly thrilled at the idea; after all, the name of the program is YOLO and the pamphlet is chock-full of all-caps text and far too many exclamation marks.

But soon after the plane lands in Australia, Munro begins to settle in. His host family is pretty cool, and he quickly makes friends with a group of kids at his new school, including Caro, whose eyes are big and wide, and whose mouth looks ready to break out in a smile, even when its filled with ramen noodles.

But just like always, as soon as things begin to show signs of improvement, The Coyote shows up, doing his best to alienate Munro from his new friends.

To make matters worse, Munro learns there is a volunteer component of his exchange experience -- one that will see him working as a "Living Partner"; to a group of special needs residents at the Fair Go Community Village in Brisbane. "No way!"; he thinks.
"I've got to get reassigned!"; It's too much. Evie had Down Syndrome, and this is just a little bit too close to home.

But to his surprise, Munro discovers that Fair Go is the one place where The Coyote actually keeps his mouth shut. Maybe this isn't going to be so bad after all. And it isn't. In fact, it's kind of great. Munro soon makes solid connections with his group of residents, including Blake, a Down Syndrome girl with a spirit almost as bright as Evie's had been.

As his volunteer hours grow, Munro finds himself spending more and more time with his group. He is especially determined to connect with Shah, a group member who managed to escape the atrocities of civil war in the Middle East in the back of truck, only to become separated from his family.

Shah is understandably distant and guarded, but to his delight, Munro slowly earns the boy's trust through brief conversations they share over a chessboard.

But when two members of Munro's group suddenly leave Fair Go, Munro's old nemesis, The Coyote, makes a fearful return and Munro suffers a setback. What was he thinking? He should have known this was all a mistake. He's let down two members of his group, just the way he let down Evie. He couldn't save her, and he can't fix things for Blake and Shah, either.

He's useless, according to The Coyote, and the sooner he realizes it, the better. Unless, of course, he can begin to trust the people around him -- the people who want to help him find the old Munro again.

With loving support and a strength he didn't know he had, Munro learns that often it isn't just one person's fault: sometimes life takes on a life of its own. And sometimes, the best thing you can do is get out of your own head and help someone else.

Darren Groth is a brilliant storyteller, his characters are rich and layered, and this book was a delight to review. Readers will surely identify with the voice of The Coyote -- that alter-ego naysayer so many of us come up against during challenging times.

And younger readers will certainly enjoy the growing romance that develops between Munro and the lovely Caro, too.

Throughout the novel, I found the dialogue between the teens both engaging and completely authentic a feat that is sometimes a difficult thing for us grown-ups to pull off successfully. Mr. Groth has clearly spent considerable time in the company of young people!

All this adds up to a page-turner of a book. The story moves quickly and we meet a whole host of characters along the way. I fell in love with the members of Munro's Fair Go group, all of them delightfully unique, while the adults who pepper the pages of the story are also wonderfully human.

In addition to real laugh-out-loud moments, this novel has some heart-wrenching moments that might have you wiping your eyes a time or two. However, the sentiment is never sloppy or gratuitous, and I reached the end of the novel having experienced "all the feels.";

While Munro vs. the Coyote is a book about loss, grief, despair, and the messiness of a sixteen year old's broken heart, ultimately it is an account of true healing. It is a book about love, the tenacity of the human spirit, and our capacity to mend.

This is the first book I have read by Darren Groth. It certainly won't be the last.