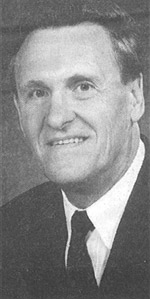 
Herbert Grubel, a professor emeritus of economics at Simon Fraser University, received the 2004 Nora and Ted Sterling Prize in support of controversy in 2004. Born in Germany, Grubel earned his doctorate in economics from Yale in 1963. He taught at Stanford, Chicago and Pennsylvania prior to joining the faculty at newly opened Simon Fraser University in 1972. He has written more than 20 books in his field of economics. In 1995 he received the Kiel University Bernard Harms medal for his contributions to international economics. He was the Reform Party's finance critic between 1995 and 1997, returning to SFU in 1997. He took mandatory retirement in 1999.

Articles: 1 Article for this author
A Professor in Parliament (Soules $19.95)
Article


Ex-Reformer Herb Grubel has foreseen the light. In A Professor in Parliament (Soules $19.95), an autobiography released prior to the United Alternative convention, the former Reform Party Finance Critic has praised Stockwell Day, new leader of the right in Canada, as "articulate, a true conservative and an experienced politician.";

Having done so, Grubel insists he isn't hankering to re-enter politics. "I have stayed out of the fray,"; he says, "In fact, I purposely didn't return a call from Terry O'Neill of BC Report after the United Alternative convention. I didn't want to say anything negative against Preston.";

While Grubel cites Preston Manning's "insatiable appetite for work"; and his "seemingly endless stamina and much psychological hardiness,"; Grubel finds fault with Preston Manning's "unwillingness or inability to have close relationships."; The extroverted Grubel, sometimes candid to a fault as a politician, maintains Manning "will probably always remain aloof, uncomfortable in social situations and disinterested in the details of people.";

Grubel and Manning sometimes walked home together as Ottawa neighbours. Whenever Grubel tried to initiate conversations that weren't work-related, he says Manning was a cold fish. "Thereafter I deliberately tried a different strategy,"; says Grubel. "I did not say anything, wondering what topics Manning would bring up to close the conversational vacuum. Most of the time the vacuum just stayed until it was broken by someone else joining us.";

On the professional level, Grubel claims Manning commandeered the editing of Reform's Taxpayers' Budget of 1995. He also complains that, as Finance Critic, he was largely excluded from drafting Reform's 1997 election budget. Manning showed "a tendency to leave important projects languishing under benign neglect"; and Manning negated "the important analytical and political work done by people he had asked to do it."; According to Grubel, Manning appointed long-time associates to positions of responsibility "in disregard of others with superior qualifications and abilities.";

Pride goes before an autobiography.

If it's any consolation to Grubel's ego, the majority of attendees at the United Alternative convention appear to have voted in agreement with his criticisms in A Professor in Parliament wherein Grubel disapproves of Manning's adherence to populist, democratic principles and "his unwillingness to offer a true conservative party platform.";

An emigrant from Germany to the U.S. in 1956, Grubel joined newly created Simon Fraser University as an anti-Keynesian economics professor in 1971. As the Reform MP for Capilano-Howe Sound from 1993 to 1997, he was branded a 'doctrinaire zealot on the marvels of market forces' but worked closely and constructively with Liberal Finance Minister Paul Martin. His tenure in Parliament was not always smooth.

With a German accent that became pronounced with agitation, Grubel once feared being accused of Holocaust denial by a CBC reporter in 1993. For a variety of reasons, including his distance from Preston Manning, he decided not to run for re-election in 1997. Herb Grubel now lives in North Vancouver and serves as a consultant to The Fraser Institute. 0-9686783-0-0