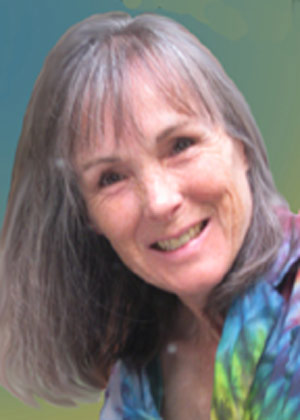 
"I fear we'll sleepwalk to global eco-cide, and Maya, goddess of illusion (and reality beneath her veils), will be no more heard than she is now. I've produced a shout for her, as best I can." -- Brenda Guiled (aka Guild, like 'wild'), author of Telling Maya.

Born in Jasper, Alberta in 1951, Brenda Guiled of Salt Spring Island grew up in the Rocky Mountains and graduated with an Honours BSc in zoology from UBC in 1972. She completed her M.Sc. in environmental education in 1978 and taught while working on curriculum research, development, and evaluation. She has published as both Brenda Guild (said "Guiled") and Brenda Guild Gillespie, including a weekly opinion-page column for three community newspapers, beginning in 1994, and several books and ENCORE: A Program of Environmental Studies, co-authored with Patricia Keays, for the B.C. Ministry of Parks and Recreation. It won first prize in a North America-wide curriculum contest in 1975. She has worked as a graphic artist, preparing many written and illustrated works for publication, and as a technical illustrator, principally of fishes and shellfishes. She has raised two children and now teaches "The Karate Kid" form of karate (with a 3rd degree black belt) to students at her own dojo.

Told from the perspective of Captain George Vancouver's older brother, her book On Stormy Seas is a sympathetic, creative non-fiction work that recalls Vancouver's monumental but under-appreciated success at charting the West Coast of Canada, and how his reputation was sabotaged by jealous bureaucrats upon his return to England.

Telling Maya is "a story that's missing in the world, about a type of woman who's so unthinkable and dangerous to the status quo that she doesn't even exist in stories." Readers meet a handful of Americans as they get to know the four living generations of an ancient line of women. Their 97-year-old matriarch Maya decides that it's time to tell her tale, to commission her autobiography. "Who will be chosen to write it? How can they keep her and her kind safe from zealots intent on destroying all trace of them? What will become of their brightest hopes and dreams?"

Her Green Pilgrims Guide to the Southern Gulf Islands encourages tourism with a reverence for nature. In Costa Rica and Belize and other exotic locales, that's called eco-tourism, but Guiled's perspective is more introspective than commercial. Guiled grew up in a national park where half of her small town worked in the tourism business and the word tourism was usually spit out like a bad word. "In my 20s, I traveled to Europe and the worst happened,"; she says, "I became a tourist. It dawned on me, though, that people there go to significant sites as pilgrims, with all the care and reverence that implies."; Her Gulf Islands booklet is for nature-keen people like herself who want to be green pilgrims. "But the day before the launch,"; she says, "I realized with crystal clarity that my strength lies in convincing people not to buy things.";

On Stormy Seas: The Triumphs and Torments of Captain George Vancouver, Horsdal & Schubart, 1992.