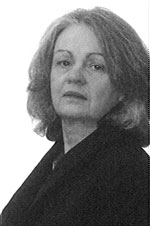 
Born on March 19, 1948 in Reykjavik, Iceland, Gunnars immigrated to Canada in 1969. She began to teach creative writing at the University of Alberta in 1990. More than a decade later she moved to the Sunshine Coast and used her new surroundings as the locale for her collection Any Day But This (Red Deer $29.95) in which one woman realizes she belongs to a class she secretly despises. Gunnars' collection of essays on writing is Stranger at the Door: Writers and the Act of Writing. Her books have received the Stephan G. Stephansson Award for poetry, the Georges Bugnet Award for fiction and the McNally-Robinson Award for fiction.

The Guest House and Other Stories. Toronto: Anansi.

Stranger at the Door: Writers and the Act of Writing. Wilfrid Laurier University Press, 2004.