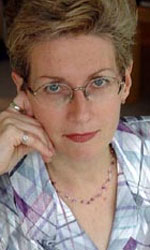 
Margaret Gunning's first novel Better Than Life (NeWest $18.95) is the story of a middle-aged recovering alcoholic who lives with his 89-year-old grandmother Min in an Ontario smalltown. All the feuding Connar clan congregates for Min's 90th birthday.

Mallory (Turnstone, $19.95)is a coming-of-age novel about intense and gifted 14-year-old Mallory Mardling, "a magnet for other people's bad intentions," who can quote William Butler Yeats in her essays but is often belittled for her masculine tendencies and facial hair. Set amid bullying in a fictional northern Ontario town in 1968, Mallory describes how an estranged, would-be novelist is kidnapped and sexually abused as a captive at the hands of a charismatic church minister named Reverend Randolph Fletcher and a maladjusted juvenile named Chris Cooper. Mallory's behavior during her ordeal confirms her strength of character and ultimately brings some social acceptance after her assailants are incarcerated. Mallory won an Honorable Mention in the New York Book Festival literary competition.

Margaret Gunning's third novel, The Glass Character (Thistledown 2014), revisits the silent film era of the 1920s through the eyes of a sixteen-year-old girl, Jane, who is sexually fixated on the much-adored but diffident comedian Harold Lloyd. Although lesser-known today than Buster Keaton or Charlie Chaplin, the talented Lloyd had as many female admirers as the likes of Douglas Fairbanks Jr. or Rudolph Valentino. Jane's naive obsession with her screen hero is sympathetically portrayed.

EMPLOYMENT OTHER THAN WRITING: Reviewing

Writing has appeared in two volumes of THE MORNINGSIDE PAPERS, BEACHAM'S ENCYCLOPEDIA OF POPULAR FICTION and INSIDE LANGUAGE: A CANADIAN LANGUAGE READER