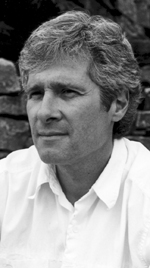 
Stephen Guppy was born in Nanaimo in 1951 and grew up in Nanaimo and Chemainus. He received BA ('77) and MA ('88) degrees from the University of Victoria and taught high school in Qualicum Beach before becoming a college professor at Malaspina University-College in Nanaimo, where he taught in the Creative Writing and English departments starting in 1986; he retired in 2016. Guppy first published a book of poems, Ghostcatcher, and co-edited Rainshadow: Stories from Vancouver Island with Ron Smith. He then released a collection of seven comic stories of Vancouver Island, Another Sad Day At The Edge Of The Empire, which frequently lampoons English colonialism in the realm of magic realism. In his Blind Date with the Angel: The Diane Arbus Poems (Ekstasis 1999), Guppy adopts Diane Arbus as his narrator: With my husband, I did fashion spreads / shot the models, this year's girls, / their hooded, black, mascaraed eyes / turned in toward some archetype, / some lost ideal of beauty. How I envied them / their insouciance, the terror / of their tragic grace wired up / on amphetamines, thin as lathes, sticking / manicured fingers down pale throats / to vomit. For his selection from Prism International, Stephen Guppy was one of three finalists for the $10,000 Journey Prize story competition in 1999. In 2004 he published The Fire Thief, described by his publishing house as "a debut novel about a good Canadian kid who is uprooted from Vancouver, B.C. to Danforth, Washington-a.k.a. Atomic City, USA. Set against startling imagery of a landscape littered with the effects of a nuclear age, The Fire Thief is a thought-provoking story about redemption, the bonds of family, the perils of radical politics, and the price of love."

Guppy is married to the painter and writer Nelly Kazenbroot and has two children. His stories and poems have appeared in Best Canadian Stories, the Journey Prize Anthology, the Prentice-Hall Guide for Student Writers, and numerous periodicals including the Alaska Quarterly Review, Event, Grain, Stand, Hawaii Review, and Ambit.