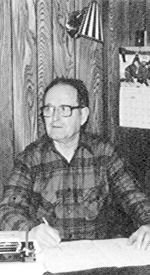 
Guppy grew up in Tofino, son of a retired Indian Civil Service officer. The Guppy family arrived in Tofino in 1921 when Walter was three. The Zeballos gold rush between 1934 and 1938 kindled his interest in prospecting. At age 18 he acquired his first 'Free Miner's Certificate'. His chronicles of searching for gold on the West Coast in the modern era are significant and rare. He traipsed from Nimpkish to the Nitinat area, across Vancouver Island from Bedwell Inlet to Buttle Lake, and along the Pacific Rim Highway route from Kennedy Lake to the Albernis. He has since contributed memoirs about the Tofino area.

Articles: 2 Articles for this author
A Place for Gold ($19.95 includes postage)
Article


In his fourth book, A Place for Gold ($19.95 includes postage) long-time Tofino resident Walter Guppy looks at the people, places and events pertaining to mineral exploration and mining on Vancouver Island.

He sees mining as a much misunderstood and maligned industry.

"I don't expect to convert anyone with a strong prejudice against mining,"; he says, "because I don't expect that any rabid environmentalist will read this book.

"However, I hope there are some with an open mind who will read it and consider the points I raise objectively. It is also hoped that this humble literary effort will contribute something toward an appreciation for the tradition of free enterprise mining that is our heritage.";

Guppy cites the right of any person to go out into the wilderness and stake a claim and the right to attempt to develop a mine.

"That is the tradition that built this nation and unless it is respected there will be no mining on Vancouver Island when the one remaining operation runs out of ore and closes.";


As one of those Tofino Oldtimers, Guppy, 79, has produced Clayoquot Soundings (Grassroots $15.50), a personal overview of the Tofino area from the 1880s to the 1980s. "My main qualification as an author,"; he says, "is simply writing about what I know.";
Guppy's father took early retirement from the civil service in India soon after World War I. In 1921, lured by publicity in British newspapers about establishing an English colony on the coast of B.C., Guppy Sr. took his family to the remote enclave of Tofino.
"There was not much incentive to obtain a higher education during the Depression,"; Walter Guppy says. "In those days there were men with university educations competing for seasonal employment on fishing boats or in the relief camps.";
Inspired by the gold mining boom at Zeballos, Guppy obtained his first Free Miner's Certificate at age 18 in 1936 and headed for the hills. He discovered an attractive prospect but couldn't develop it prior to the onset of World War II. "I enlisted in the army rather than bear the stigma of being called a 'Zombie',"; he recalls.
Guppy served with the Canadian Forestry Corps in Scotland where he married in 1943. After the war he made a living as an electrical contractor but maintained his sidelong career as a prospector. Because he had learned to type during the war, he was selected to serve as secretary during the Tofino campaign to revive the government's commitment to build a road along Long Beach to connect Tofino and Ucluelet.
"To make a long story a bit shorter,"; he said, "we finally got the road and some of us, now that we see what has developed as a result, wish that we hadn't.";
Guppy's two previous books are Wetcoast Adventures (1988) and Wilderness Wandering on Vancouver Island (1993). He is presently completing a manuscript on historical, geological, political and environmental aspects of mining on Vancouver Island.