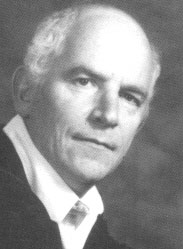 
Born in London, England on February 5, 1936, he was bombed out of his home with his family in 1940. He moved to Dorset and came to Canada at age 12. He enrolled as a Cadet in HMCS Venture Royal Canadian Naval College in 1954, married in 1958 and stayed at sea until 1966. He graduated from University of Victoria in Mathematics and Physics. After careers in the navy, computer analysis and house designing, he began writing five Le Carre-like thrillers from Sidney which appeared between 1979 to 1985. His critically acclaimed 1987 novel, The Ring Master, attributes the rise of Nazism to the influence of Wagner's Ring Cycle on Hitler. In The Voice of the Crane he combines the influences of Japanese theatre and puppet show techniques for a novel of voices about Emperor Hirohito's life. Its narration is divided between an offhanded American born in Japan, Ambrose Magellan, and an omniscient voice commenting on the rituals and decline of the Japanese court. In 1990 he left Sidney to live in Ottawa where he wrote a third novel on the psyche of nations; this time the USA entitled Arcadia We$t: & the Storyboard from Elvis thru Thos. Jefferson, published in 1994. That year he returned to Victoria and began working on an autobiographical novel, "The Charlatan," completed in 2002, but unpublished until 2012.

In 1997, Gurr became "addicted to Argentine Tango," a subject featured in The Charlatan Variations. See below.

Articles: 1 Article for this author
The Charlatan Variations
Press Release (2012)


From the author of The Ring Master, nominated for the Governor-General's Award, comes this novel autobiography - or autobiographical novel told in several variations. Caught between observation and imagination, the author tries six times to make his life into a novel using a variety of literary confidence devices.

Born into an aristocratic British family as William Le Breton Harvey Brisbane-Bedwell, the protagonist of the first variation supposedly meets Albert Einstein, Franklin Delano Roosevelt, and Amelia Earhart as a boy and witnesses American troops mustering for D-Day on the English coast. This story is abandoned, exposed as fiction, while the second variation places the protagonist in the US Navy, as a young pilot who crashes his plane into a volcano on Papua New Guinea that spews liquid gold, which is protected by tribes of cannibals who, in the next variation, a Jesuit priest attempts to convert.

Or so we are led to believe ...until the novelist becomes an internationally renowned ballroom dancer and spy in the Con Brio variation, who teaches the tango aboard a cruise ship with Margaret Thatcher and Noel Coward on board as VIP passengers. Or so we are led to believe in the final variation, on Liberation Day, as the author pays homage to his father, who was killed in the Italian campaign and was buried in a war cemetery in Forli. Taken together, the six aborted novels constitute a moral history of the 20th century.

Written in the self-reflexive tradition of Cervantes' Don Quixote, Sterne's Tristram Shandy, Melville's The Confidence Man, and Thomas Pynchon's Gravity's Rainbow, David Gurr is an unabashed charlatan, a literary confidence man who pushes at the borders of fiction and fact, art and reality to expose good and evil afoot in the world. That great charlatan, the devil, is not far behind.