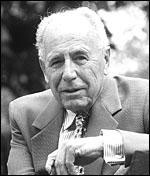 
"I am a very nosy person, always have been." -- Arthur Hailey

Arthur Hailey started his fiction career from Vancouver. Just as the Fairmont New Orleans Hotel served as the research model for Hailey's blockbuster novel Hotel, the former Vancouver International Airport, a facility now used for small planes, was the model for the airport that appears in the climax of Hailey's Flight Into Danger, a 1956 television movie in which half of a plane's passengers and its crew are afflicted by a serious outbreak of food poisoning due to fish dinners. When the two pilots are incapacitated, a man with wartime experience flying only single-engine planes is forced to take the controls of a DC-4. This man has long been traumatized by his wartime experiences as a pilot. His wife serves as his co-pilot while their son is ill. There is a severe storm over Vancouver but the pilot overcomes flashbacks to land the plane. Hailey, a former pilot in WW II, imagined this scenario while taking a flight between Vancouver and Toronto. The four-year-old television network of the Canadian Broadcasting Corporation bought the script for $600. The pivotal role of the emergency pilot was played by a young James Doohan, who later became widely known as 'Scottie' on Star Trek. The airing was an unprecedented success for the fledgling CBC, leading to a rescreening in Britain. The script became the basis for a 1957 Paramount movie called Zero Hour. A novelized version of this story, co-authored by John Castle, was released in 1958. One year later it was published in the United States as Runway Zero-Eight. This marked the start of Hailey's fiction career. The production was recast in England in 1962 as Flight into Danger.

Arthur Hailey was born in Luton, England on April 5, 1920. An RAF pilot, he immigrated to Canada in 1947. He became a Canadian citizen but retained his British citizenship while working as a sales promotion manager for a tractor-trailer manufacturer in Toronto. Encouraged by his wife Sheila, he wrote screenplays that included "Flight into Danger". Hailey's second novel was The Final Diagnosis in which a hospital pathologist is accidentally responsible for an infant's death. Following the success of his breakthrough novel Hotel, Hailey and his wife moved to California's Napa Valley in the mid-1960s. His thriller Airport was researched in Los Angeles and Chicago. It became one of numerous Hailey novels that served as the basis for a movie, spawning a spate of so-called 'disaster' films in the 1970s. Hailey's own work inadvertently gave rise to a series of disaster spoofs such as Airplane! (1980) that effectively scuttled the disaster film genre. After seeing a late-night tv broadcast of Zero Hour!, three members of an Los Angeles comedy troupe named Kentucky Fried Theatre--Jim Abrahams, David Zucker and Jerry Zucker--bought the film rights and remade Hailey's original television idea scene-for-scene into a low-budget spoof.

The Haileys moved to the Bahamas in 1969 to avoid taxes. They settled in a mansion in Lyford Cay, an exclusive residential resort on New Providence Island, where Hailey began writing a local history during his semi-retirement in the 1990s. His wife wrote I Married a Best-Seller (1978).