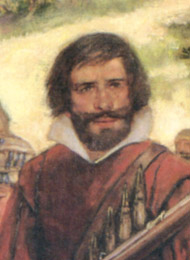 
Clergyman Richard Hakluyt provided the first published account of Sir Francis Drake's circumnavigation of the globe, summarizing Drake's explorations on the California coast. He did not provide any confirmation that Drake sailed as far north as British Columbia. In 1582 he published the first map to indicate Drake's presence on the Northwest Pacific Coast, a distorted misrepresentation first given to Henry VIII by Giovanni da Verrazano, and later provided to Hakluyt by Michael Lok. This map was immediately followed by "The French Drake Map"; of Nicola van Sype, circa 1583, and the 1589 map of Joducus Hondius that depicts Portus Nova Albionis, or Drake's Harbour.

Hakluyt was a clergyman who lectured on geography at the University of Oxford. He befriended sea captains and merchants, gathering intelligence on the Pacific fur trade and other foreign commercial enterprises, and he published all available information on British voyages. The third part of his major work in 1589 concerns North America and the Northwest Passage.

Hakluyt also republished exploration accounts gathered by Antonio Galvao, a Portuguese collector of stories of discovery, who was in the service of the Portuguese crown from 1527 to 1539, the last three years as governor of the Moluccas. He died in 1557 at Lisbon. Galvao did not attest to the truth of, nor his belief in, the stories he collected. The accounts he had gathered were first edited and published in 1563 by Francisco de Souza Tavares. Hakluyt brought this work to an English audience based on a translation of the original Portuguese by an unnamed "merchant of our country [England].";

Hakluyt advised Elizabeth I until her death in 1603 and he became a charter member of the Northwest Passage Company in 1612. Possibly born around 1552, Hakluyt died in 1616.

Inspired by Richard Hakluyt, the non-profit Hakluyt Society was founded in 1846 and it continues to publish and promote public knowledge of records of voyages, travels and geographical discovery. It operates c/o Map Library, British Museum. It publishes on average two volumes per year, with its membership open to anyone interested in geographical discoveries and cultural encounters.

The Principall Navigations, Voiages and Discoveries of the English Nation, Made by Sea or Ouer Land, To The Most Remote and Farthest Quarters Of The Earth (London: George Bishop and Ralph Newberie, 1589; Christopher Baker, 1659; Hakluyt Society, Peabody Museum of Salem, Cambridge University Press, 1965). Includes "The Famous Voyage of Francis Drake";

The Principal Navigations, Voyages, Traffiques and Discoveries of the English Nation (London, 1600).

An Excellent Treatise of Antonie Galvano, Portugal, containing the most ancient and modern discoveries of the world, especially by navigation, according to the course of times from flood until the Year of Grace, 1555. Contained within A Selection of Curious, Rare and Early Voyages, and Histories of Interesting Discoveries, Chiefly published by Hakluyt. (London: G. Woodfall, 1601; 1812)

A particular discourse concerning the greate necessitie and manifolde comodyities that are like to growe to this Realme of Englande by the Westerne discoveries lately attempted, written in the year 1584. (Unpublished until 1877, within The Documentary History of the State of Maine)