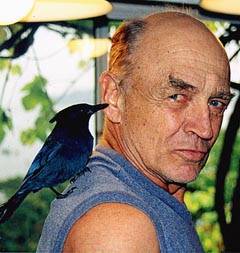 
Born on March 16, 1929 in Vancouver, Richard (Dick) Hammond lived on the Sunshine Coast all his life. Self-educated and extremely well-read, he worked as a handlogger and a timber cruiser's helper, and was a self-employed log salvor from 1955 until his retirement at age 1998. He began to write in 1995.

All his books concern coastal lore, mostly true stories that he originally heard from his father. Towards the end of his writing career he was looking for a publisher for compendium of thought and study, "The Immortality Hypothesis--Death: the End, or the Beginning?"

Dick Hammond died at dawn, September, 10, 2008, with the falling tide, leaving his wife, Jo, their two children, Patricia and Erik, and his three cats.

Articles: 1 Article for this author
A Touch of Strange (Harbour $32.95)
Opinion

It is much appreciated that you would include my latest book in your Origins section, but unfortunately my stories aren't fiction. My publisher prefers to think they are, and lists them that way-and most readers seem to think them too good to be true-but I've made every effort to ensure they adhere to the originals as told by my father, who died in 1975.

Faithfully transferring oral stories to print is not easy. (I much prefer to write fiction where imagination isn't constrained by fact-or plot by memory.) Retaining my father's campfire style is perhaps more difficult than translating a story from one language to another. And translation is notorious for its hazards.

Sometimes a good storyteller doesn't just need a good story-he needs to be an actor, too. Father whispered, laughed, shouted, imitated the cries and calls of animals and the noises of nature; sang, tried to convey the accents in which his characters spoke, be they Irish, Scottish, Swedish, or whatever; interspersed anecdotes and explanations and invited and answered questions from his audience.

To transfer the West Coast tales my father told in such detail, using such devices, requires peculiar skills. First, of course, is to remain true to the original, adding nothing of which the narrator would have disapproved. Second, don't try to 'improve' the story in any way. Third, and most important, nothing should be added with the intention of impressing readers with your own abilities.

I'm by no means confident that I've followed these rules with sufficient diligence, but I'm certain that I've done so well enough that these books aren't really fictional. So I'm sorry, but in all honesty it appears (to me) that I should be disqualified from your fiction coverage. I regret this very much.