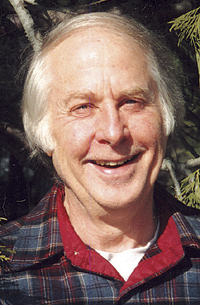 
Herb Hammond (b. 1945) of Winlaw is a registered professional forester and forest ecologist with more than 30 years experience in forest management. He extensively criticized government and industry policies in Seeing the Forest for the Trees, which presents his case for holistic forestry use. It received the Roderick Haig-Brown B.C. Book Prize in 1992. It has been followed by Maintaining Whole Systems on Earth's Crown: Ecosystem-Based Conservation Planning for the Boreal Forest (New Society $49.95 2009), a guide to protecting and managing the planet's largest remaining carbon reservoir. 978-0-9734779-0-0

Articles: 1 Article for this author
Seeing the Forest Among the Trees (Polestar $34.95)
Article


THE WESTERN CANADA WILDERNESS Committee, a major B.C. publisher of environmental titles, plans to release a proposal this fall to expand Pacific Rim National Park to take in the Carmanah, Walbran and nearby valleys containing old growth timber. "It would be managed in a way similar to South Moresby Park," says Paul George, director of the WCWC, "with Natives partners in managing the park, and no formal agreement on expansion until all land claims are settled." The WCWC and the Sierra Club have already tried to halt logging in the Walbran Valley by taking the provincial government and Fletcher Challenge to court on technicalities. But George says the latest proposal holds the promise of a lasting solution. The Walbran is near Carmanah Valley on the southwest coast of Vancouver Island. Coincidentally the WCWC is publishing a map and hiking guide to the Walbran and Cannanah Valleys ($3.95 each), as well as a B.C. Wildlife Viewing Guide ($8.95).

OTHER FOREST COMPANIES AND THE MINISTRY of Forests are also under attack. Companies have laid off about 20,000 workers in the last 12 years. Over the same period they have increased the volume of wood cut each year from 20 million cubic meters to 87 million cubic meters. Imbalances like this infuriate Herb Hammond, a professional forester and Forest ecologist, who says some B.C. forest companies are destroying the forests to get the trees. For ten years he has battled big forestry companies and even his own professional association to draw attention to poor logging practices. Now, his vision for a sustainable forest industry is outlined in his new book Seeing the Forest Among the Trees (Polestar $34.95). Among Hammond's suggested improvements: forests should be managed by about 150 community forest boards across B.C., operated by tribal groups, hunters, ranchers, millworkers, mountaineers, and whoever else uses the forests.

JOE GARNER, THE BESTSELLING AUTHOR OF Never Fly Over An Eagle's Nest and Never a Time to Trust, has rebounded from a serious operation to expose "bribery and corruption" in forestry practices in British Columbia. Joe Garner's latest book, Never Under the Table (Cinnabar), condemns past practices in the forest industry but praises forest companies for finally responding to public pressure. "I feel optimistic as long as they continue planting trees faster than they cut them," he says.