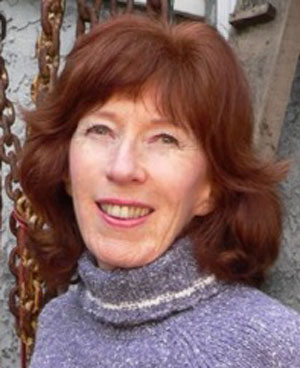 
Born on August 28, 1941 in Sussex, England, Josephine Hammond emigrated to Canada via a freighter through the Panama Canal. Arriving in Vancouver in 1967, Hammond worked as a teacher in Sechelt until 1970 when she married log salvor and author Dick Hammond. She writes under the pen name of Jo Hammond.

Edge of the Sound: Memoirs of a West Coast Log Salvager (Caitlin $24.95) recalls how Jo Hammond learned to manoeuvre an open, 19-foot salvage boat, tie knots, sing arias to the sea lions, suckle her child while chasing rogue logs and "expect the unexpected.";

Having stepped off the freighter Canadian Star at age 25, in 1967, Hammond, an English-trained schoolteacher, had no idea she would find lasting companionship on the Sunshine Coast with reclusive Dick Hammond, author of three books of coastal lore, Tales from Hidden Basin (1996), Haunted Waters (1999) and A Touch of Strange (2001).

Both John Daly and Dick Hammond were staunchly independent characters, with high IQs, a low tolerance for fools and a love of classical music. Whereas Iglauer and Daly could listen to music on the water in the cramped and toilet-less 41-foot troller,
Morekelp, the Hammonds preferred their concerts in bed.

"It was impossible to hear anything while driving that open boat with its 352 Ford HO engine,"; says Jo Hammond. "Dick didn't even have a radio.";

Both Edge of the Sound and Fishing with John are love stories-a la gruff Spencer Tracy meeting urbanite Katherine Hepburn-with humour and tales of adventure. Iglauer's Fishing with John became the basis for a made-for-tv Hallmark film Navigating the Heart starring one of "Charlie's Angels,"; Jaclyn Smith.

The CBC television series The Beachcombers could have been about the likes of Dick Hammond, except that long-running program was a fanciful and often silly depiction of West Coast salvaging. Before the CBC started filming the series, the producer wanted to use Dick Hammond's jet boat and his partner Alan's tug Styx for the series,

"They said they would paint the tug white,"; says Jo Hammond, "But I don't think Dick and his partner Alan treated them with much respect down on our dock, so the next thing we heard was they had found what they were looking for with Harry and Johnny Smith's operation. They owned buildings, marina, gas dock.

"Maybe if Dick and Alan had been more polite to them, I wouldn't have to defer the property taxes. Dick used to hate their filming presence over at our booming grounds. They'd come over to him and order him to stop work, and he'd refuse, and understandably so.";

Review of the author's work by BC Studies:
Edge of the Sound: Memoirs of a West Coast Log Salvager

Articles: 1 Article for this author
Home Before Dark
Review


Take a smelly stranger in a dirty camouflage jacket, a mysterious house fire, add five kids, two boats and a 1980 Subaru station wagon with a raccoon skull hotmelted on its hood and you've got the makings of a West Coast adventure, Home Before Dark (Orca $9.95), by Jo Hammond. Her first published children's novel is loosely based on the rambunctious lives of her two sons who have merged with the characters in her book. Her teenage character Erik Johnson, for instance, knows his boats and engines. At age five, Erik drove his parents' log-salvaging boat "powered by a 460 Ford coupled to a three-stage Hamilton jet"; at the age of five. By age ten, he was piloting his own azure blue 10-foot fiberglass boat with a twenty-horsepower Mercury outboard named DC-3, for the "most dependable plane ever built."; As Home Before Dark begins, Erik's buddy Mike has just lucked into a secondhand runabout. A seemingly innocent run to Bowen Island turns nasty when a dirty stranger attempts to steal Mike's boat. During their camping trip near a burned-out farm house, accompanied with girls Toni and Bronya, the boys discover an old miner's lamp. They wake that night to the eerie and unlikely sounds of organ music...and the mystery is on.

Hammond, born in Sussex, England where she worked as a "relief herdswoman"; during her teen years, taught high school science and music and was a member of the Royal Liverpool Philharmonic choir. Emigrating on a freighter through the Panama Canal to Sechelt in 1967, she later married veteran log salvor Dick Hammond, now an author of coastal tales. [see abcbookworld.com]

She obtained her own log salvage licence, appeared as an extra on CBC's The Beachcombers for many years, raised two children free of her own "terribly restricted and autocratic upbringing"; and survived towing their house on a barge when it nearly fell into the sea. After a bout in ICU with anxiety-induced fibrillation, her enrollment in a stress management course set her to writing. 1-55143-340-0 --by Louise Donnelly