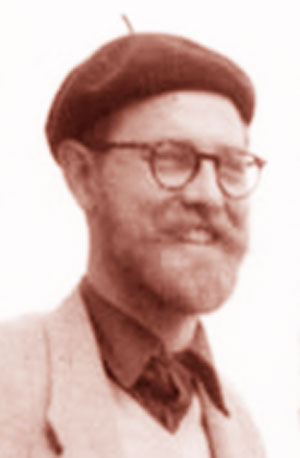 
In her incarnation as a literary Florence Nightingale, Mona Fertig set about rescuing the reputations of little-known B.C. artists-such as her father, George Fertig, who died unheralded in 1983-and sculptor David Marshall. After Marshall, her next three candidates for revival were Frank Molnar, Jack Hardman and LeRoy Jensen.

As Molnar is the only one of trio still living, his self-portrait graces the cover of Fertig's second volume in her Unheralded Artists of B.C. series, The Life & Art of Frank Molnar, Jack Hardman & LeRoy Jensen (Mother Tongue 2009 $34.95) with texts by Eve Lazarus, Claudia Cornwall and Wendy Newbold Patterson respectively.

Frank Molnar (1936- ) fled from Budapest during the Hungarian Revolution of 1956 and went to the USA where he studied art at the Pennsylvania Academy of Fine Arts. In 1962 he arrived in Vancouver and later met artists David Marshall, Peter Aspell, Georg Schmerholz, Elek Imredy and Jack Akroyd. In 1969 he became one of the first art teachers at Capilano College where he taught life drawing and artistic anatomy for almost 30 years. His students included Charles Van Sandwyk, Cori Creed and Will Rafuse. Today he continues to paint and lives in Vancouver with his wife Sylvia.

Jack Hardman (1923-1996) pictured at right, was born in New Westminster and studied art in Western Washington and at UBC. He married B.C. poet Marya Fiamengo in the 1950s. A sculptor and a printmaker, he was an assistant to Cubist sculptor Alexander Archipenko in 1957. Hardman taught many art students in Burnaby in the '60s, and from the mid '70s through the '80s he was the Director of the Burnaby Art Gallery. His friends included artists Joe Plaskett, Jim Willer, Joy Zemel Long, David Marshall and Peter Paul Ochs. He lived in Burnaby where he died in 1996.

LeRoy Jensen (1927- 2005) spent his childhood in China, Japan and Vancouver. He studied painting at the Royal Academy of Copenhagen, as well as with the French cubist Andre L'Hote in Paris. In 1954 he returned to Vancouver to paint and forged a friendship with artists Jack Hardman, George Fertig, David Marshall and Peter Aspell. He was a founding member of Greenpeace and later a member of the Victoria-based Limner group. In 1982 he moved to Salt Spring Island with his family, where he fought for social environmental causes and continued to paint the human condition, especially women, until his death in 2005.

Next year we'll see the release of Fertig's long-in-the-works study of her father and his art, in tandem with the first retrospective exhibition of George Fertig's work at the Burnaby Art Gallery.