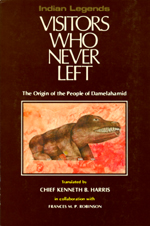 
In 1948 Arthur McDames was persuaded by his nephew Kenneth B. Harris to tape record Gitksan myths in his Tsomalia language. Harris provided translations of his uncle's stories into English via his mother Irene Harris, a woman in her eighties. These versions, in turn, were edited by Frances Robinson of the UBC Department of Fine Arts for Visitors Who Never Left: The Origin of the People of Damelahamid (1974). In addition to tracing the ancient history of the people who live between the Skeena and Nass rivers, Harris' account recalls the origins of the Killer Whale and Thunderbird Twtjea-adku, as well as the revenge of Medeek, the bear who arose from a lake to punish people for their misdeeds, a fundamental Gitksan story. According to Robinson, the stories "have not been tampered with in any way and are given exactly as translated by Ken Harris, using his own divisions and order. These are his stories, presented exactly as he understands them."; Arguably these stories can be credited as much to Arthur McDames. Harris also inherited McDames' title Hagbegwatku, meaning "first-born of the nation.";