Born in 1952 into the Eagle Clan in Masset, Haida Gwaii, as a member of the Delkatla community, master carver, goldsmith and painter James (Jim) Hart has been a Chief of the Eagle Clan since 1999 when he received the hereditary title of his great-great-grandfather, Charles Edenshaw: 7idansuu (pronounced "ee-dan-soo"). To mark the event, he held a potlatch and raised a 55-foot totem pole in Massett.

Hart is related to Edenshaw (c. 1839-1920)--sometimes dubbed by outsiders as the "Michelangelo" of Haida art--through his mother, Joan Hart. He was spared the privations of the residential school system because his father was Anglo-Canadian. Jim Hart grew up with his grandparents and first worked as a fisherman. Having discerned the importance of Haida art while attending high school, Hart first worked as an apprentice for Robert Davidson in 1978 when Davidson was creating an Edenshaw memorial house in Masset.

In 1979, Hart was commissioned by the Royal British Columbia Museum in Victoria to carve a 7-foot x 9-foot cedar Dogfish Screen. Jim Hart then started working for Bill Reid in 1980 and worked on some of Reid's most important sculptures, as well as smaller works, in Vancouver until 1984. Specifically, he helped complete Reid's world-acclaimed masterworks, The Raven and the First Man and Spirit of Haida Gwaii/The Jade Canoe. Hart credits Reid for his protection and guidance when, as a young man, he had to quickly learn to adapt to urban life in Vancouver in extreme contrast to his upbringing in Masset.

In 1988, Hart oversaw the installation of the Haida house at Canadian Museum of Civilization on Ottawa.

After four years of tutelage under Bill Reid, Hart understood that Reid's presence was so strong it would be necessary for him to learn how to function with complete independence if he could ever hope to develop his own unique style and ideas. Since then, in 2000 Hart carved the replacement to a Bill Reid pole within "the Haida Village" behind the Museum of Anthropology and in 2008 he carved the Respect to Bill Reid Pole now located in The Bill Reid Gallery in Vancouver.

Along with Haida carver Reg Davidson, Jim Hart also authored one catalogue book, Haida Artifacts: An Exhibition (1990), published by the Lowie Museum of Anthropology in Berkeley, California. While steeped in the traditions of his people, very familiar with Haida history as conveyed by oral stories, he has not felt constrained by conventions. As an innovator, for instance, In 1982, he was the first First Nations artist in British Columbia to complete a bronze sculpture of a totem pole, he has imported and incorporated abalone shells from New Zealand and he has dared to generate his own art-form--the stand-alone wall. Hart's art also includes gold, silver and bronze jewelry, and fabrics. He has built numerous Haida houses, given three potlatches and been actively involved in many others. Much of his artwork is in private and public collections worldwide.

It is not always easy to trace the evolution of Hart's major works because they can take more than a decade to reach a permanent home.

In 2003, he initially installed The Three Watchmen, a 14-foot bronze sculpture at the entrance to an apartment residence in Kerrisdale's Quilchena Park in Vancouver. It depicts traditional watchmen figures who guard Haida from dangers, both physical and spiritual. At the time it was his largest work beyond totems, and a career milestone. This experimental, ground-breaking work was commissioned by Polygon Homes Ltd., a condominium housing developer in the Lower Mainland under the direction of Michael Audain. In 2011, this bronze megalith was installed outside the National Gallery of Canada in Ottawa as part of their permanent collection.

A 1995 wood sculpture, Frog Constellation, was installed on the campus of Simon Fraser University in 2012.

Between 2012 to 2014, Hart worked on his largest project up until that time, The Dance Screen (The Scream Too), an 11-foot x 16-foot work that was completed on the fourth floor of the Vancouver Art Gallery, but is permanently housed at the Audain Museum. Conceived back in 2009, The Dance Screen was first installed as a temporary exhibit in the Vancouver Art Gallery. For this work, Hart took three years to salvage red cedar from the Haida Gwaii wildfires. Hart then worked for fifteen months with his assistants, John Brent Bennett, Brandon Brown, Carl Hart and Leon Ridley, including a five-week stint at the Bill Reid Gallery in the summer of 2012, enabling visitors to watch him working with his crew.

The Dance Screen (The Scream Too) has since been accorded pride of place as arguably the most striking work in the permanent collection of the Audain Museum in Whistler, British Columbia. Few know the work was instigated as a much smaller, private work. Michael Audain originally commissioned Hart to carve a plaque that would hang on the wall of his cottage in Pender Harbour. Hart was inspired to keep expanding this commission until it went far beyond the bounds of its initial conception.

One hundred guests at the museum named for its founder and chief benefactor attended a one-hour, inaugural dance performance for the work by Hart and his troupe of Haida dancers on September 22, 2018 at the Audain Museum. Dancers wore ceremonial regalia that now belong to the National Gallery of Canada. About halfway through the performance Hart called Audain to come forth from the audience and honoured him with a song. "It comes from one of my old grandfathers who just about drowned," Hart said, "and people composed a song for him because they realized, if he drowned, how sad they'd all be, because he did so much work for the people. So this song means, 'Where would we be today if it wasn't for you?'" Hart then adorned Audain in an eagle mask, covering him with a blanket and bringing him into the dance.

Both a barrier and a doorway, this imposing. stand-alone work (or wall) emphasizes the role of the salmon within Haida society and ecosystems. The carvings depict an eagle, a bear, orcas, a raven and human figures all rimmed by swimming salmon, adorned with glimmering turquoise shell tails. "The screen says to me, all of us, whether we have two feet or four, whether we have hair, scales, fur or feathers, we're all related to one another in one way or another in the great cycle of birth, life and death," Michael Audain, the museum founder who commissioned the piece, said after the ceremony. Therefore, it's surely incumbent (on) us to treat each other with mutual respect." Jim Hart has reiterated: "The salmon has taken care of us for thousands of years and it's up to us to take care of them."


In 2016, Hart and his son Gwaliga worked together finalizing the patina and paint on another bronzed Yellow Cedar Pole, supervising the casting at the Tallix Art Foundry in Beacon, New York, after two years of work.

On April 1, 2017, Jim Hart raised his Reconciliation Pole, honouring a time before, during and after Canada's Indian Residential Schools, at UBC's Main Mall, between Agronomy Road and Thunderbird Boulevard. Also commissioned by Michael Audain, two years in the making, this 55-foot pole was carved by Jim Hunt with the assistance of his son, Gwaliga, as well as fellow Haida carvers John Brent Bennett, Brandon Brown, Jaalen Edenshaw, Derek White, Leon Ridley and Hart's late son, Carl (who died in 2015), from an 800-year-old red cedar (ts'uu). At the base are a co-existing canoe and a longboat, side by side; the former represents all First Nations with different styles of paddles and the latter represents all Canadians.

There were no residential schools on Haida Gwaii. Many of Hart's relatives--including his grandfather, great aunts and uncles--were sent to the Coqualeetza Residential School in Chilliwack. Hart grew up with an understanding that many died as a result, or many were never able to overcome their trauma. The pole depicts a Coqualeetza student without any feet, unable to run escape. "We’re here today, we’re still here, and we want to go forward," Jim Hart told Georgia Straight. "This pole is about understanding what has taken place, and the depth of all of that, because you can’t smooth the edges on it."

By 2017, Jim Hunt had carved more than 25 Haida totems. He lives in Masset, while maintaining a home in Vancouver. He received the Order of British Columbia in 2003 and the Queen's Diamond Jubilee Medal in 2013. He has honorary doctorates from Emily Carr University of Art and Design and from Simon Fraser University (2017).

Review of the author's work by BC Studies:
Charles Edenshaw 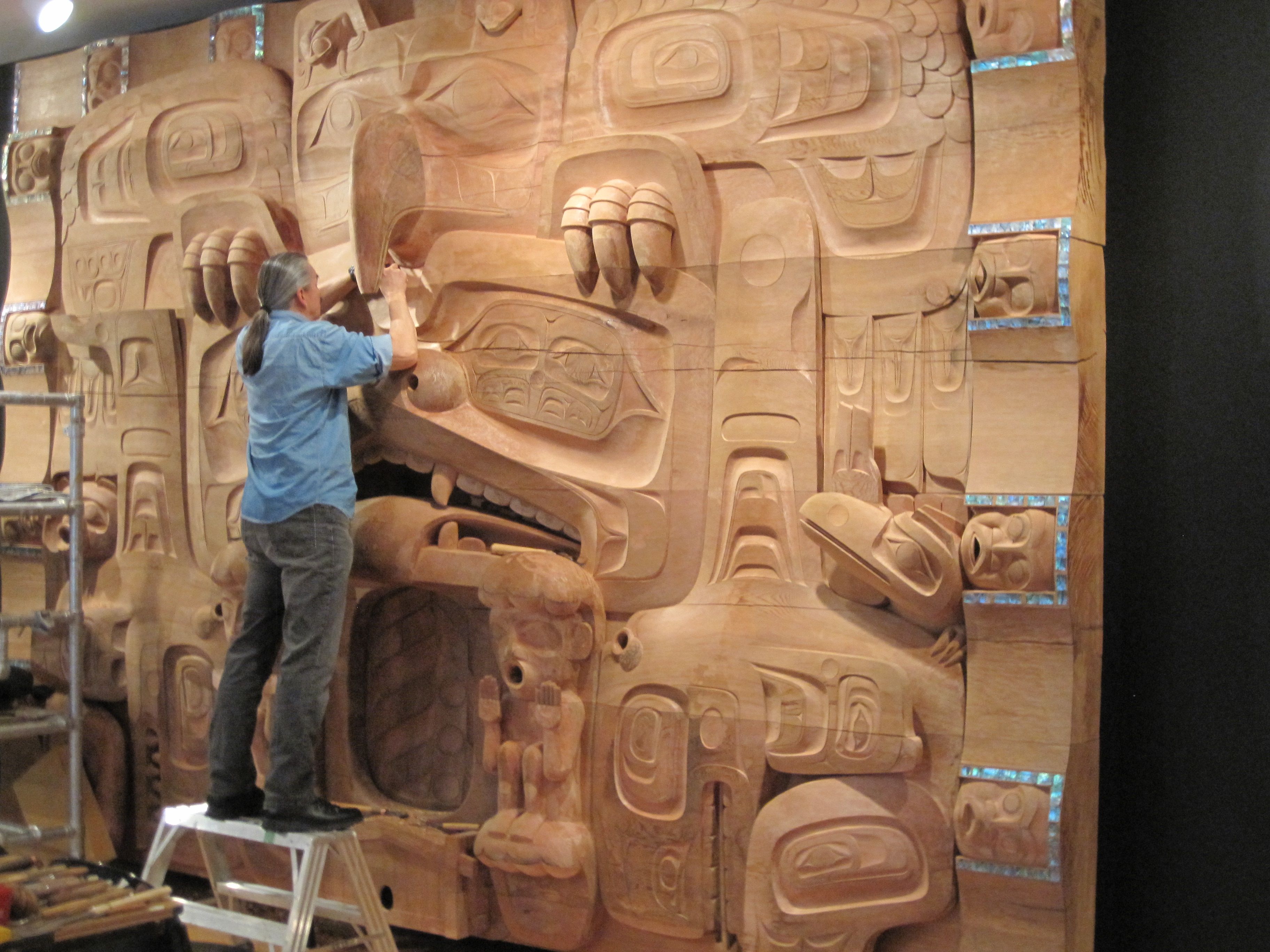