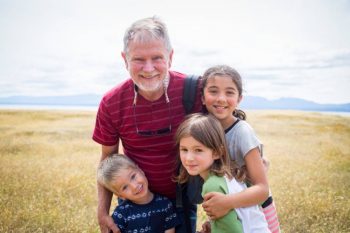 
Grandfathered: Dispatches from the Trenches of Modern Grandparenthood (Heritage $22.95) chronicles retired newsman Ian Haysom's adventures with his grandkids Mayana, Emma, and Linden. Through funny anecdotes, Haysom explores the unexpected lessons they have taught him (and those he has attempted to teach them). Reminiscent of Bill Bryson (or "Bill Bryson with a touch of arthritis," says Haysom), this memoir also investigates the changing role of grandparents in the twenty-first century.

Father of four, grandfather of four, and lifelong journalist Ian Haysom was born and raised in England and worked as a reporter for The Evening Standard before immigrating to Canada in the 1970s. He worked at several major Ontario dailies and eventually relocated to BC, where he rose to editor-in-chief at both the Vancouver Sun and Province newspapers. Moving to television in the 1990s, he became news director at Victoria's CHEK-TV and later Global News. Semi-retired, he continues to work as a news consultant.