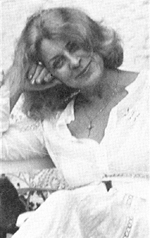 
"Lala Heine-Koehn, and the title of her new book, The Certain Days of Abstinence, notwithstanding, is a poetic voluptuary. While taking on the gestures, thoughts, and habits of a Japanese courtesan in the Tenth Century, she manages to invest her language with both life and eros. Her pillow talks and what it says about sex seems to me important; it reminds us that haste in the pleasures of life, like haste in art, should be avoided at all costs. There are lots of reasons for the legendary longevity of Asian coitus, which can last hours, even days-not so handy for the quick-fix crowd or the 30-minute television byte, but definitely good for the nervous system." -- Gary Geddes

Born and raised in Poland in 1936, Lala Heine-Koehn studied voice at the Handel Conservatory in Munich before coming to Canada in the 1950s. She arrived in Victoria in 1977 from Saskatchewan. She assumed the voice of a Japanese courtesan to evoke eternal matters of the heart in The Certain Days of Abstinence (Ekstasis, 1999). Her seventh collection is in the fashion of The Pillow Book of Sei Shonagon. Previous works include Portraits (1977), Sandpoems (1979) and Ice of the Wind (1982). She has been published primarily by Sono Nis Press.