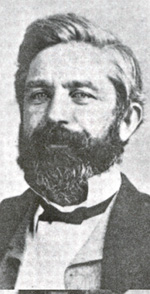 
The oldest existing house in British Columbia belonged to Dr. John Sebastian Helmcken who married Cecilia Douglas, the eldest daughter of Governor James Douglas, in 1852. Their house on Elliot Street in Victoria, supposedly on its original foundations, has become a tourist attraction as an adjunct of the Royal B.C. Museum.

Born in London on June 5, 1824, Helmcken came to Vancouver Island in 1850 as the Hudson Bay Company surgeon having studied medicine at Guy's Hospital in London. He prepared his own medicines from plants based on his training at the Chelsea Physic Garden. "I had to supply the Hudson's Bay posts throughout the country with the medicines they required," he wrote. "Dozens of bottles of Turlington's balsam and essence of peppermint, grosses of 'purges' of jalap and calomel, dozens of emetics of ipecacuanha and tartar emetic and other simples. But bottles and corks were scarce, so that the parcels could not be said to be neat."

After a shakey start, Helmcken married Cecilia Douglas and won election to the island's first legislature in 1856. Between 1856 and 1871, he served as Speaker for the Victoria legislature, then as Speaker for the united British Columbia assembly. Ironically he was one of three men who were sent by Governor Anthony Musgrave to Ottawa in 1870 to negotiate British Columbia's union with Canada. Initially ambivalent about Confederation, Helmcken at first believed British Columbia and Canada would eventually be absorbed by the United States. He had remarked in 1868 that it made as much sense to amalgamate with Australia as it did to enter Confederation. "Canada is for all practical purposes,"; Helmcken declared in 1870, "further removed from us today than England; we know less about her.";

Helmcken's trip by rail through the United States convinced him of the viability of Confederation. He returned to his medical practice in 1871 when B.C. joined Canada, and he declined most powerful and high profile positions except for membership on the board of the CPR. He became the founding president of the British Columbia Medical Society in 1885. Helmcken continued as the province's jail physician until 1910, a position he had held since 1851. Among his patients was Emily Carr.

Helmcken wrote frequently for the Victoria Colonist newspaper and began writing his "Reminiscences" in 1892. Helmcken died in Vancouver at the age of 96 in 1920. His memoirs were published after his daughter Edith (Dolly) Helmcken provided her permission in her will to have his papers donated to the Provincial Archives.


Dr. John Helmcken, one of 80 immigrants who arrived in 1850, is usually regarded as the first man to practise European medicine on the Pacific Coast of Canada, although he had numerous predecessors on the ships of explorers and traders. A tavern-keeper's son, Helmcken was known by children in Victoria as 'Dr. Heal-my-skin'. Helmcken became the First Speaker of the Vancouver Island General Assembly and helped to negotiate the colony's entrance into Confederation. Not politically ambitious for himself, he maintained his medical practice until his retirement in 1910 at age 86 and died ten years later. Vividly described in Emily Carr's memoirs, Helmcken was one of the few gentry in early Victoria worthy of veneration.