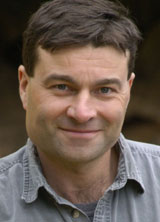 
Tom Henry was born in Duncan, B.C. in 1961. He earned his BFA in writing and history from the University of Victoria. A former staff writer for Monday magazine, Henry has authored Westcoasters: Boats that Built BC (Harbour, 2001 -- winner of the Bill Duthie Booksellers' Choice Award), The Good Company: An Affectionate History of the Union Steamships (Harbour, 1994 -- winner of the BC Historical Federation's Lieutenant Governor's Award), Dogless in Metchosin (Harbour, 1996), The Ideal Dog and Other Delusions (1996), Paul Bunyan on the West Coast (Harbour, 1995) and Small City in a Big Valley: The Story of Duncan (Harbour, 1999).

Henry's audiotape of readings from Dogless in Metchosin became popular with listeners who knew him from his CBC Radio "Country Life" column.