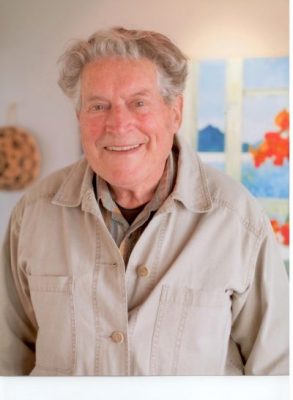 
"I never went to school to learn photography--not a single day," he says.

With more than 80,000 images of Vancouver taken during the past half-century, Fred Herzog is the city's premier street photographer, having focussed on store fronts, cafes, barber shops, pedestrians, cars, signs since his emigration from Germany in 1952.

"It was my goal from the start to show city vitality," he says. His mostly colour images suggest Vancouver was a more vibrant and unself-conscious city in the Fifties and Sixties when it was bustling burg in which the working class could still afford to live.

Replete with vacant lots, abandoned cars and bygone signage, his images invite the adjective authentic, but his own website puts it best. "The images are not about important people, events or edifices, but about the vitality of the city, its ambience, and the daily activities of the people. Also their dress, automobiles and recreation, and the pride with which they participate and enjoy human contact.";

Herzog came to Vancouver in 1953 and worked on ships for three years before making his living primarily as a medical photographer. "My present style of street photography was formed in spring 1957 with a bang," he says, "practically complete from day one." He has subsequently credited Norman Levine's starkly realistic memoir/travelogue Canada Made Me (London: Putnam, 1958) for showing him a literary view of the city (and Canada) that mirrored his own.

Herzog sold his first print in 1970. Since then he has prodigiously thrived in relative obscurity before finally hitting it big. Now officially represented by the Equinox Gallery, Herzog catapulted into the public eye in 2007 with a major January-to-May exhibit at the Vancouver Art Gallery and an accompanying coffee table book, Fred Herzog: Vancouver Photographs (D&M $45), with textual contributions from Grant Arnold and Michael Turner. It was shortlisted for the BC Booksellers Choice Award and the City of Vancouver Book Prize.

Douglas Coupland's appreciative 2011 essay on Herzog's work, "Somebody Spoke and I Fell Into a Dream,"; validates Herzog's documentation of Vancouver's as a grimey but vibrant backwater in which industry thrived and pollution was taken for granted.

Bogner's Grocery, a 1960 photograph by Fred Herzog, was among works by seven master Canadian photographers featured in a stamp series issued by Canada Post in 2014.

Fred Herzog: Modern Color was chosen as one of the top ten photo books of 2016 by the New York Times. [See review below] In 2017, his work was the subject of an exhibit at the Audain Gallery in Whistler.

Review of the author's work by BC Studies:
Fred Herzog: Photographs by Fred Herzog


1930 Born in Germany
1952 Immigration to Canada
1953 Earliest colour slides of Vancouver
1957 Began with photographic documentation of Vancouver and other cities in North America.

Fred Herzog, who is 87 years old in 2017, had to wait until 2011 for a substantial book (Fred Herzog Photographs, Douglas & McIntyre) illustrating some of his more important photographs. Fred Herzog: Modern Color is an expansion on that earlier effort, containing new texts and some 25 images previously unpublished in book form. The texts provided here by David Campany, Hans-Michael Koetzle, and Jeff Wall further elucidate the extraordinary journey in colour photography that Fred Herzog set for himself.

Born in 1930, Herzog emigrated from Germany to Canada at age 22 to take up a job in Toronto that he had heard about through an uncle. He already had a camera (a folding Kodak Retina, made in Stuttgart), but more importantly, he brought fresh eyes and photographic energy, especially when he shifted to Vancouver in 1953.

His c.100,000 images of Vancouver taken between then and 2015 are the most significant documentation of the city in the post-war era (but see below for what might be an even greater treasure trove). They are also a major contribution to the global picturing of urban life commonly known as street photography.

As with all older street photos, there is an archival value to his images: the city Herzog pictured has largely disappeared, obliterated by redevelopment on a scale equal to New York City's in the 1920s.

For sixty years Herzog sought out four key characteristics of the Vancouver scene: bursts of colour in an otherwise banal, drab cityscape; the abundance of "stuff,"; especially the plethora of second-hand goods that would have been rarities in his teen years during and after World War Two in Germany; the strange, un-European urban voids and empty lots in and near downtown Vancouver, which he knew were awaiting "development,"; even as they reminded him of bombed-out sections in his native Stuttgart; and finally, Vancouver street life, which was surprisingly vibrant in areas Herzog frequented.

Herzog shot on Kodachrome slide film, the remarkable chemistry of which produced saturated reproductions of the saturated colours in the world. It was a "slow film,"; needing more light or a longer exposure than any commercial film in use since -- it had an ASA of 10, so exposures as long as half a second matched with a wide-open aperture (often at f2) were normal for Herzog.

He prided himself on having steady hands, a trait that allowed him to use an extraordinary film product that others could not use without a tripod.

Colour photography was seen as a medium for advertising and holiday memories until the 1970s; historically, black and white was for real photo art. Herzog and others had to fight against that bias for decades. He did have predecessors in the use of colour, including Arnold Genthe's and J.H. Lartigue's autochromes shot in the first quarter of the twentieth century. Saul Leiter (1923-2013) shot close-up colour in New York starting in the late 1940s; many of his images could be details from Fred Herzog photographs. The gradual, broader acceptance of colour as a medium for art was catalyzed by the 1976 exhibition "Photographs by William Eggleston"; at the Museum of Modern Art in New York.

Most of Herzog's best work was done in Vancouver, but he also photographed when he travelled, finding that the grittiness of Mexico, Guatemala, Newfoundland, and many cities in the U.S. offered similar opportunities to picture "the real."; Fred Herzog: Modern Color has samples from those other locales. In all of them, he sought out what he termed "reality"; - a descriptor he took from one of his favourite authors, John Dos Passos, whose "camera-eye"; technique in Manhattan Transfer (1925) Herzog took as a model of urban documentation in writing.

Between 1953 and 1990, Vancouver was not as postcard-pretty as outsiders might think. It was gritty and crime-ridden, and until about 1975 it was heavily polluted by sawmills, many of which were on the site of today's False Creek high-rise residential towers. Douglas Coupland's 2011 essay on Herzog's photography, "Somebody Spoke and I Fell Into a Dream,"; describes Vancouver in the 1950s as a filthy ecological disaster zone -- which it was.

Herzog has been compared with Walker Evans and others, but his style was as much the style or "look"; of the neighbourhoods he walked: Strathcona, Chinatown, the downtown eastside, and downtown Vancouver itself.

In the process he avoided what Jeff Wall, in his essay here, calls the morbidity of the rest of the city (p. 35). He was on a hunt for images -- walking and checking his "trap line,"; much as a Flaubertian flaneur would have.

Until his retirement, Herzog's day job as a biomedical photographer at UBC limited his time for street photo work largely to weekends. Still, he averaged two rolls of Kodachrome per week (36 images each) for about fifty years. Many have wondered what treasures lurk in his untapped archive.

In the spring of 2017 Pacific Press, the owners of The Vancouver Sun and The Province newspapers, announced they intended to dispose of their entire photo archive on short notice, with no regard to where the material went. Their archive consists of approximately 20,000 rolls of film (some might have had a small number of exposures) shot per year, for the fifty years after the Second World War.

Pac Press had done this once before, in the 1960s, when the firm moved from the Sun Tower to 6th and Granville.

Alerted to this looming disaster, staff at the Vancouver Archives turned to City councillors for help, with the result that funds were found for storage space for all the negatives from the mid-1960s to 1995 -- at which point staff photographers went digital. For now, the associated prints will continue to be stored at Pacific Press's offices, but by the time you read this there will likely be further developments.

Indeed the fragility of Vancouver's visual history seems to be a fact of life. Herzog the flaneur has roamed with the exact freedom that news photographers once had. They would go out and find "the stories,"; which suggests that the Pac Press archive should yield up a parallel photographic history to the one Fred Herzog assembled on his own personal mission.

Fred Herzog: Modern Color was chosen as one of the top ten photo books of 2016 by the New York Times. Since 2007, sales of Herzog's prints (albeit from very few selected slides, now digitalized) may have been the strongest ever experienced by any Canadian photographer, Karsh included.

Herzog put Canadian street photography on the international map, benefitting from the fact that he revealed a cityscape that few people outside of Vancouver knew. An irony in his work is that few Vancouver residents "saw"; the world he pictured either.

Bill Jeffries is a writer and curator who opened the Coburg Gallery in 1983; it was then the only commercial (i.e. privately owned) photo gallery in Vancouver. From 1988 to 1991, he was Director and Curator of the Contemporary Art Gallery, and after a three-year stint at the Vancouver Art Gallery, he was Director and Curator at Presentation House Gallery (2001-2005). He then ran the Galleries at Simon Fraser University until late in 2012. In the mid-1990s he worked at a range of environmental organizations, focusing mainly on wetlands preservation in British Columbia.