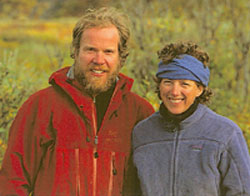 
In 2003, Karsten Heuer, a wildlife biologist, and his wife Leanne Allison, a filmmaker, joined a 123,000-strong Porcupine caribou herd for its annual 2,800-mile trek from winter feeding grounds to their calving grounds on the oil-rich coast of the Beaufort Sea. The couple endured mosquitoes, blizzards, grizzlies and wolves to produce Allison's award-winning NFB documentary Being Caribou and Heuer's conservation memoir, Being Caribou: Five Months with the Arctic Herd (M&S 2006 $26.99), in their efforts to protect the herd in advance of expanded oil drilling. Although the migrating caribou are protected in Canadian territory, the Bush administration in Washington is eager to exploit oil supplies beneath the calving grounds within the Alaskan Wildlife Refuge. Heuer claims drilling in Alaska would reduce the United States' dependence on foreign oil by only 4%, or approximately six months' worth of oil. Approximately sixty percent of the Porcupine caribou calves are born in the refuge area that oil companies hope to develop. The newlyweds accompanied the herd for more than 1500 kilometres, over four mountain ranges and dozens of rivers in northern Yukon and Alaska. "Throughout the process of writing this book,"; he says, "and while Leanne edited and co-directed the film, we both wondered whether it was a eulogy we were producing or a successful call to action. Time will tell, I suppose, but unfortunately time is running out.";

Heuer previously worked in the Banff and Jasper national parks in the Rockies, in Slovakia and Poland, and in the Madikwe Game Reserve in South Africa. A recipient of the Wilburforce Conservation Leadership Award, he also wrote Walking the Big Wild: From Yellowstone to the Yukon on the Grizzly Bears' Trail (2002). The U.S. edition of Being Caribou received the Grand Prize at the 2005 Banff Mountain Book Festival. Formerly residents of Dunster, B.C. when they wrote Being Caribou, Heuer and Allison have since moved to Canmore, Alberta.