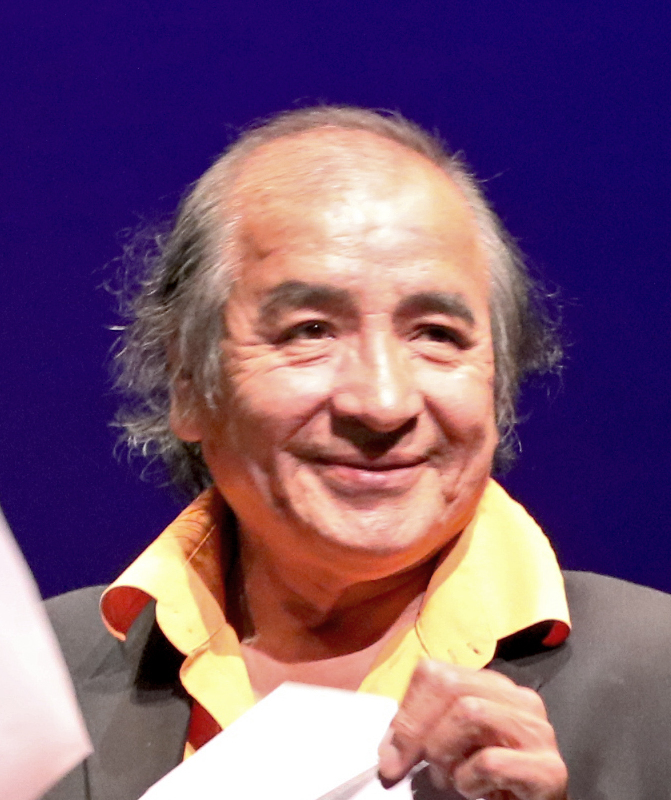 
Co-commissioned by Western Canada Theatre and the Secwepemc Cultural Education Society, Tomson Highway's play Ernestine Shuswap Gets Her Trout (2005) is set in British Columbia during the visit of Prime Minister Sir Wilfrid Laurier to the Thompson River Valley in August of 1910. The central characters are four women, representing the four seasons, preparing the feast for Laurier's visit. This cabaret style play premiered in Kamloops with an Aboriginal cast in 2004. It was also the subject of an hour-long Bravo! television documentary in 2004: Tomson Highway Gets His Trout, from Getaway Films, directed by Tom Shandel, who has described Highway's work as being "at once light-hearted burlesque and angry agitprop."

Ernestine Shuswap Gets Her Trout was produced to mark the importance of a treatise written in 1910 by James Teit, on behalf of 14 chiefs of the Thompson River basin, to assert their collective rights to land and resources. Chief Louis of Kamloops recited the speech to Prime Minister Laurier: "We welcome you here, and we are glad we have met you in our country. We want you to be interested in us, and to understand more fully the conditions under which we live. When the seme7uw'i, the Whites, first came among us there were only Indians here. They found the people of each tribe supreme in their own territory, and having tribal boundaries known and recognized by all. The country of each tribe was just the same as a very large farm or ranch (belonging to all the people of the tribe).... They [government officials sent by James Douglas] said that a very large reservation would be staked off for us (southern Interior tribes) and the tribal lands outside this reservation the government would buy from us for white settlement. They let us think this would be done soon, and meanwhile, until this reserve was set apart, and our lands settled for, they assured us that we would have perfect freedom of travelling and camping and the same liberties as from time immemorial to hunt, fish and gather our food supplies wherever we desired; also that all trails, land, water, timber, etc., would be as free of access to us as formerly. Our Chiefs were agreeable to these propositions, so we waited for treaties to be made, and everything settled."

Written in the spirit of Shuswap, a "Trickster language," Ernestine Shuswap Gets Her Trout was mounted in the style of Highway's preceding play Rose (2004), the third instalment of his "rez" cycle set on the Wasaychigan Hill Reserve, the same venue for The Rez Sisters (1986) and its sequel Dry Lips Oughta Move to Kapuskasing (1989). There are three characters named Rose; one didn't get born; a second died on a Harley and a third has become chief of the reserve. Ontario Premier Bob Rae and Chief Big Rose are signing an historic treaty while the Sudbury Mafia plan to transform the women's community hall into a huge bingo palace. It's 1992 all over again. Characters re-appear from the previous two plays, plus Emily Dictionary and her female biker pals.

Highway's production notes for Rose advised, "Think of the exercise as just a bunch of kids, the kind you were when you were five years old, playing in and with a chest filled with old clothes and objects... And last, the old-and very tiresome-question: 'should only native actors have the right to play native roles?' (Which to me has always sounded a lot like: 'should only Italian actors have the right to play Italian roles?' Or: 'Thought Police productions presents an all-German-cast in Mother Courage by Bertolt Brecht. Only Germans need apply.')." To make clear his feelings on the issue of "Aborginals Only" theatre, Highway has pleaded "in my Cree heart of hearts" for an end to political correctness, if, for no other reason, than it will enable him to have his plays produced more often.

The eleventh of twelve children, Tomson Highway was born in a tent near Maria Lake, near Brochet, Manitoba in 1951. After six years in his nomadic Cree family, he attended a residential school in The Pas where his introduction to music escalated into ambitions to become a concert pianist. He composed music for Aboriginal theatres and festivals, joined the Native Earth Performing Arts Company in Toronto in 1984, and worked with his brother René, a dancer and choreographer. Both brothers were openly gay. Tomson Highway's only novel, Kiss of the Fur Queen (1998), is based on events that led to his brother René's death of AIDS. Twice a recipient of the Dora Mavor Moore Award, Highway is Canada's best-known Aboriginal playwright and the first Aboriginal writer to receive the Order of Canada.

"When I was growing up," writes acclaimed Cree playwright Tomson Highway in his remarkable prologue to From Oral to Written: A Celebration of Indigenous Literature in Canada, 1980-2010 (Talon $29.95), "the nearest centre of white civilization, so to speak, was Lynn Lake, a mining town seventy-six miles to the south as the crow flies. There being no road, one had to fly there, by bush plane with its pontoons in summer, its skis in winter. To us children, Lynn Lake with its population of some three thousand white people was the Emerald City: New York or Paris! All by way of saying that Indigenous languages on reserves like Brochet [where he grew up on the Barren Lands First Nation in northern Manitoba] remain intact. To this day, there are people up there-my godmother, aunts, uncles, cousins-who speak no English. My mother didn't speak it."

In the past decade indigenous literature has exploded. For a comprehensive reckoning, you can find information pertaining to 252 indigenous authors in British Columbia alone by visiting the ABCBookWorld reference site. 978-1-77201-116-6

Articles: 1 Article for this author
The Laurier Memorial petition
Declaration of rights (1920)


In a petition signed by fourteen of our chiefs and sent to your Indian
department, July, 1908, we pointed out the disabilities under which we
labour owing to the inadequacy of most of our reservations, some
having hardly any good land, others no irrigation water, etc., our
limitations re: pasture lands for stock owing to fencing of so-called
government lands by whites; the severe restriction put on us lately
by the government re: hunting and fishing; the depletion of salmon
by over-fishing of the whites, and other matters affecting us. In many
places we are debarred from camping, travelling, gathering roots and
obtaining wood and water as heretofore. Our people are fined and
imprisoned for breaking the game and fish laws, and using the same
game and fish which we were told would always be ours for food,
Gradually, we are becoming regarded as trespassers over a large
portion of this, our country. Our old people say, "How are we to live?
If the government takes our food from us they must give us other food
in its place." Conditions of living have been thrust on us which we did
not expect, and which we consider in great measure, unnecessary and
injurious, We have no grudge against the white race as a whole, nor
against the settlers, but we want to have an equal chance with them of
making a living. We welcome them to this country. It is not in most
cases their fault, they have taken up and improved and paid for their
lands in good faith. It is their government which is to blame by heaping
up injustice on us. But it is also their duty to see their government does
right by us, and gives us a square deal. We condemn the whole policy
of the B.C. government towards the Indian tribes of this country as utterly
unjust, shameful and blundering in every way. We denounce same as
being the main cause of the unsatisfactory condition of Indian affairs in
this country and the animosity and friction with the whites. So long as
what we consider justice is withheld from us, so long will dissatisfaction
and unrest exist among us, and we will continue to struggle to better
ourselves. For the accomplishment of this end we and other Indian tribes
of this country are now uniting and we ask the help of yourself and
government in this fight for our rights. We believe it is not the desire,
nor policy of your government that these conditions should exist. We
demanded that our land question be settled, and ask that treaties be
made between the government and each of our tribes, in the same manner
as accomplished with the Indian tribes of the other provinces of Canada,
and in the neighbouring parts of the United States. We desire that every
matter of importance to each tribe be a subject of treaty, so we may have
a definite understanding with the government on all questions of moment
between us and them. In a declaration made last month, and signed by
twenty-four of our chiefs (a copy of which has been sent to your Indian
department), we have stated our position on these matters. Now we
sincerely hope you will carefully consider everything we have herewith
brought before you and that you will recognize the disadvantages we
labour under, and the darkness of the outlook for us if these questions
are not speedily settled. Hoping you have had a pleasant sojourn in this
country, and wishing you a good journey home, we remain

The Chiefs of the Shuswap, Okanagan and Thompson or Couteau tribes
- per their secretary, J.A. Teit, August 25, 1910