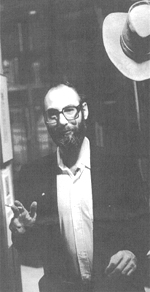 Born in Winnipeg on May 29, 1944, Bill Hoffer frequently engaged in literary feuds--publishing one of them in the form of a correspondence with Brian Fawcett--and he published special editions by writers that included W.P. Kinsella, Milton Acorn, Robert Bringhurst, Ernest Hemingway, John Metcalf, Alden Nowlan, Susan Musgrave and Elizabeth Smart. He also published works by artists such as Clifford Harper, Carel Moiseiwitsch, and Herbert Siebner.

Hoffer attended University of Saskatchewan, then enrolled in the Political Science, Sociology and Anthropology (PSA) department of Simon Fraser University. As an antiquarian bookseller, he moved from his first store, Falstaff Books on West 10th Avenue in Vancouver, to a location above the Love Shop on Granville Street, then established his headquarters at 60 Powell Street. From there he comfortably harangued his customers and spread vitriol on his enemies. Hoffer believed the CBC should be "destroyed immediately" and he had venomous comments about the Canada Council. "If anyone questions my honesty," he proclaimed, "he is sued--immediately and automatically." His chronic need to pontificate from his self-appointed position of superior bookseller and literary maven was viewed by some as childish and pathetic. Possibly he never got beyond the shadow of his exceptional father, Dr. Abram Hoffer [See Abram Hoffer entry], co-founder of orthomolecular medicine. William Hoffer believed his father deserved the Nobel Prize. Although Bill Hoffer was frequently hampered by depression and diabetes, many people in the book trade admired his knowledge and uncensored outlook. Glenn Woodsworth wrote Cheap Sons of Bitches: An Informal Bibliography of the Publications of William Hoffer, Bookseller (Tricouni Press and Stephen Lunsford). It provides a complete guide to Hoffer's publishing and writing. In the early 1990s, while taking Russian language lessons in Moscow, Bill Hoffer met a widow with two teen-aged children. They married and he remained in Moscow, amassing a collection of 3,000 handmade wooden and clay toys. Diagnosed with lung cancer, he returned to the West Coast to receive medical treatment from his father. William Hoffer died of lung cancer on September 28, 1997.


Vancouver bookseller, publisher and polemicist Bill Hoffer died of cancer in Victoria on September 28, 1997 at the age of 53. Prairie-born-and-raised, Bill Hoffer was a graduate student at SFU's volatile PSA Department before turning to bookselling in the late 1960s. In the ensuing 20-plus years, he operated bookshops at a variety of locations in Vancouver, most notably at 4529 West 10th Ave (as Falstaff Books), #104 - 570 Granville, and finally in Gastown at 58 and 60 Powell. Bill Hoffer built a huge collection of Canadian literature, by far the largest stock in Canada, which was in later years relegated to a warehouse. He was acknowledged in the international antiquarian booktrade as the leading authority on Canadian literature.

Bill had a love/hate relationship with Canadian literature and was a constant campaigner against government subsidy for the arts, specifically the Canada Council. In 1987, with The Fraser Institute he co-published John Metcalf's essay, Freedom From Culture. In 1991, Bill dismantled his bookshop and publishing enterprise and relocated to Moscow, a move that understandably surprised many. He married and established a life in his adopted country which he said, as soon as he arrived, felt like home. After mastering the Russian language and the intricacies of the Russian book trade and bureaucracy, Bill was attending auctions and finding significant books which were making their way into major North American research libraries. This phase of his life ended in August with the discovery of lung cancer and his return to Canada for treatment -- by Paul Whitney, BC BookWorld, 1997