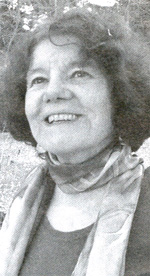 
Born in London [date withheld], Hollingsworth is an internationally-produced playwright who emigrated from England in 1968. With an MFA from UBC in theatre and creative writing, she joined UVic's Writing department in 1992 and left the faculty in 2002. Having also written extensively for television and screen, she has received the Chalmers Award and the Dora Mavor Moore Award for drama along with three ACTRA awards for radio plays.

Hollingsworth's stage plays include Bushed, Alli Alli Oh, Operators, Ever Loving (about three war brides), Mother Country (about ultra-English characters on a B.C. island) and Endangered Species (a collection of four one-act plays, including The House that Jack Built, which continues to be the subject of academic papers). Produced on CBC-TV, her play Saying It was published by Scirocco in 1996. Willful Acts, republished by Talonbooks, is a collection of full-length and one-act plays. These include The Apple in the Eye, Diving, Islands, Ever Loving, War Babies and Commonwealth Games (set in Victoria B.C during the Commonwealth Games). Later stage plays include O Positive and Deep Song.

Hollingsworth published her first collection of short fiction, Smiling Under Water, in 1989. Emily Carr's mysterious and possibly damaging treatments in an English sanitarium are incorporated into Hollingsworth's first novel, Be Quiet (Blue Lake, 2004). "Be Quiet is a story of ageing and creativity in which Emily Carr becomes a sort of trickster figure, informing the lives of a contemporary woman (who, at 63, is finally breaking away from her job at the university and returning to painting), her daughter and the young stranger who has married her ex-husband." Set in Canada, France and England, the novel explores two little documented periods in Emily Carr's life during the first decade of the last century.


Margaret Hollingsworth's formative years were spent in Britain where she won a national playwriting contest at the age of 16. While in England she worked in scientific research, publishing, theatre, and as a mobile librarian. She spent a year in Verona, Italy and travelled around the world, supporting herself as a freelance journalist and foreign correspondent. She immigrated to Canada in 1968, moving first to Montreal and then to Thunder Bay where she again worked as a librarian. She left Thunder Bay to undertake BA in psychology at Lakehead University.
Margaret loved living in Northwestern Ontario, and the area provided a backdrop for some of the first plays she wrote in Canada, including Operators and Bushed. While at Lakehead, she began to write seriously, finishing the first draft of a novel before going on to graduate studies in the Creative Writing Department at UBC in Vancouver. She earned an MFA in theatre and creative writing while working as a reader, recording books for the blind. She launched herself as a freelance writer, living on Galiano Island and specialising in stage, film and radio, and went on to teach writing at David Thompson University in Nelson, B.C.
In 1982, Margaret moved to Toronto where she won several awards for playwriting. She continued to publish short stories and essays in literary journals like The Malahat Review and Canadian Fiction. She achieved her ambition of working in Montreal when she was appointed Writer-in-Residence at Concordia University. In 1989, she was Writer-in-Residence at the University of Western Ontario. A collection of her stories was published at this time under the title Smiling Under Water.
It is not possible to categorize Margaret's drama, but some of it has been described as edgy and experimental. Aware that this kind of work is rarely celebrated on our professional stages, Margaret self-published a book of short, experimental plays under the title Endangered Species. The collection is one of her most successful published works. The plays have been widely produced in colleges, schools and universities, and dissected in academic journals. [She is grateful for her association with Richard Pochenko whose method of teaching clowning provided support for her ideas.]
Ms. Hollingsworth has also been described as a feminist writer, and while she does not dispute that much of her work has feminist overtones, she has striven to make her messages universal. Her concern has been to provide work for women actors.
In 1992, Margaret returned to British Columbia to teach creative writing at the University of Victoria. She was appointed Associate Professor in 1993. Two new plays were produced after her move back to B.C. In Confidence premiered in Vancouver, produced by the New Play Centre, and it was also produced by Buddies in Bad Times in Toronto. The play went on to be translated into German and to run for over a year in Berlin. It was subsequently turned into a TV play under the title Saying It, and those involved were nominated for Gemini Awards. Blowing up Toads premiered in the PlayRites festival at Alberta PlayWorks and was later re-written and published under the title The Commonwealth Games in a re-issue of her play collection Willful Acts, by Talon Books. A two-act play O Positive (unpublished and yet to be produced) was given a staged reading at the Finborough Theatre in London England, and received a special judge's award at the Edward Albee Conference in Alaska. Deep Song (unpublished and unproduced) received a staged reading by Paine's Plough Theatre in London. Poppycock, a play she wrote for Richard Pochenko, was produced at the Battersea Arts Club in London, England in 1999.
Her best known essay "Why we don't write,"; published in Canadian Theatre Review (1985) concerns the absence of women's work in the stage repertoire. It is still used in drama courses and she continues to write essays and stories. Her autobiographical essay "Deaf Music"; appears in Going Some Place (Coteau Books) and has been anthologised by the Oxford University Press. Her story "Beyond Closure,"; which appeared in The Capilano Review was nominated for a B.C. magazine award and a Journey Prize. Shortly afterward, Margaret began the long process of writing and research that culminated in the publication of her first novel Be Quiet.
Margaret Hollingsworth's papers are in the archives of the University of Victoria where she is a Professor Emeritus.


Emily Carr's mysterious and possibly damaging treatments in an English sanitarium are incorporated into playwright Margaret Hollingsworth's first novel, Be Quiet (Blue Lake $21). "Be Quiet is a story of ageing and creativity in which Emily Carr becomes a sort of trickster figure, informing the lives of a contemporary woman-who, at 63, is finally breaking away from her job at the university and returning to painting, her daughter and the young stranger who has married her ex-husband."; Set in Canada, France and England, the novel explores two little-known periods in Emily Carr's life during the first decade of the last century. 0-9730831-6-6
BCBW Summer 2004