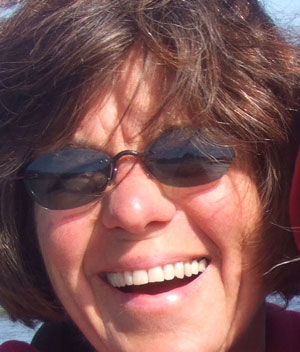 
Cornelia Hoogland was born on the Sumas Prairie in the Fraser Valley and her first collection of poetry is in part an exploration of her parents' emigration to Canada from Holland (The Wire-Thin Bride, Turnstone Books, 1990).

For about twenty years she lived half the year in B.C. (on Hornby Island, B.C., and in Courtenay), and the other half in London, Ontario where she taught at the University of Western Ontario. Now she permanently resides in B.C.

Hoogland has performed, lectured, and worked internationally (particularly Cuba), in the areas of poetry and drama. She was the founder and the co-artistic director of Poetry London (www.poetrylondon.ca), an organization that brings prominent writers into lively discussion with London writers and readers.

Woods Wolf Girl (Wolsak & Wynn, 2011) is a Canadianized, modern retelling of Little Red Riding Hood through poetry, in which Red herself is a three-dimensional character who learns to 'swig gin in the tool shed with the boys'. It explores the notion of the good girl as well as the wolf--and was shortlisted for a 2012 Relit Award.

EMPLOYMENT OTHER THAN WRITING: Professor 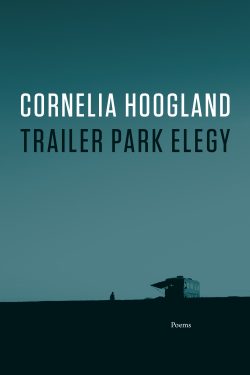 Trailer Park Elegy is not Cornelia Hoogland's first book-length long poem. Her Woods Wolf Girl (Wolsak & Wynn, 2011), for instance, is a Canadianized, modern retelling of Little Red Riding Hood through poetry, in which Red herself is a three-dimensional character who learns to 'swig gin in the tool shed with the boys'. It explores the notion of the good girl as well as the wolf-and was shortlisted for a 2012 Relit Award.

Hoogland has also spoken and written about the long poem form and its appropriateness as a response to grief. In her paper presented at the 2015 League of Canadian Poets' Long Poem Symposium, she spoke about its challenges, among them:

... the question of courage. I wanted to take greater risks, but in doing so, I risked disturbing my reader. Death is brutal. Had I show that? Had I entered the unknown? How did I become darkness; what was the darkness that I claimed?[1]

Among the long poem's possibilities, she mentioned its serial nature that allows for "contingencies" - where "the poet writes the same poem again and again with slight variation or wholesale revision; where "(t)he same idea gets filtered through various metaphors."[2]

Now, in response to the untimely and tragic death of her brother, Hoogland's Trailer Park Elegy is a prolonged construct of poetic fiction to work her way through absence, separation and sadness.

Here she employs the voice of a narrator to explore the concepts of death and mourning through various contingencies, lenses and metaphors. These include quantum physics, time, the universe, nature, birds, memory and voice.

Grief is the connective tissue, the fascia, holding each section together, facilitating the long poem's "heavy lifting" (p. 66) and addressing the question, "What kind of broken are we?" (p. 84).

Through the poetic voice of the narrator, the reader is drawn into that ambiguous space that comes from rupture, namely the untimely death of a brother, "that half-life between sound / and memory of sound" (p. 11), "a nothing-charged-with-absence" (p. 42). Hoogland's narrator 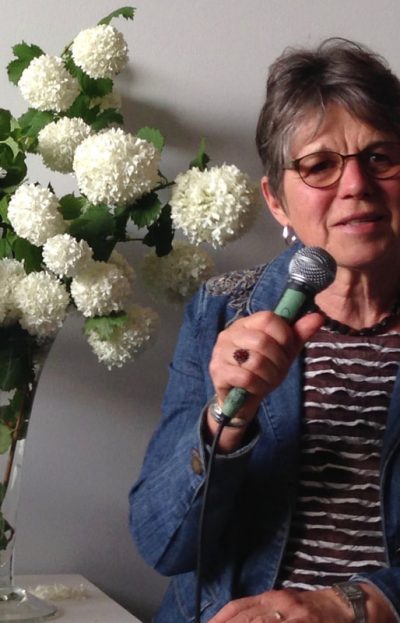 From the opening line of Seamus Heaney's centering epigraph, "You are neither here nor there," I found myself engrossed in the "charged ... absence"; that Hoogland's Trailer Park Elegy evokes, and was reminded yet again of how close we each are to "life's / swift transit" (p. 42).

The book opens, fittingly, at the edge of the sea. Here, the stage is set for an intimate and often lyrical exploration of loss and grief: the "stone beach,"; the "desolate sea," where everything speaks of death, and even "the horizon, fold" conjures "the membrane / between the living and the dead." (p. 11).

Each page is a shore on which the poem breaks, its continuous waves sweeping the reader along. Each section's placement on the page, its shape, line breaks and the spaces between lines evoke both absence and presence, the stark reality of loss, and what remains (p. 48):

His absence is a room

Among the contingencies explored is the possibility of connections between the dead and the living. There Hoogland employs notions from quantum physics, as the narrator reflects on "how dark matter ... / ... interacts with all that happens." "Who's to say";the narrator asks, that after his death, her brother hadn't caused that "torrent of sound" to "erup[t] from an unused radio" (p. 68), ensuring that even his daughter couldn't find the switch to turn it off.

Even in the face of death, the universe seems unperturbed, unchanged: the "[s]tars/ [still] shine their 13 billion year old light / on us" (p. 66), and "the moon still tugs / the sea to the edge" (p. 44). Yet nature seems complicit in mourning the death: "A wail lifts / rocks from

Turning to birds of the air for signs, the narrator finds only confirmation of darkness, fear and the fleetingness of life: the gulls above the sea, with "[d]arkness/ leak[ing] from their wing tips" (p. 12); "migratory robins ... fall[ing] silent" (p. 64); and the sparrow, in a scene from Beowulf, that flies in "out of the dark" above the revellers, "crosses the length of the lit hall, / exits" (p. 24). Later, both sparrow and brother are conflated, as "[h]e hollows for flight. / Always the sparrow of fear - " (p. 30).

The perspective of memory provides a powerful set of lenses through which to flesh out the character of the brother and the significance of his relationship with the narrator and their family: memories of their childhood, of adult lives not always geographically close, and of familiar places they had frequented: "Our woods, brother" (p. 35). Hoogland's narrator counters the reality of death and loss with a poignant and delicate image as (p. 35):

She ponders the imponderables: the role of time and memory in keeping the dead alive: "Can time ... seal at the edges, become memory? / Can time be lost?" and their embodiment: "My body a container / of loss? Memory embedded in my tissue ... " (p. 41). 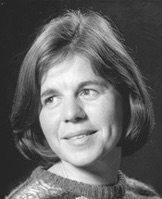 Throughout the work, the power of voice is used to great effect, especially that of the absent brother. His words are poignant, potent threads that weave through the long poem. They evoke his character, and the self-deprecating humour of the "man who knew he was the punchline. / No, wait, it gets better" (p. 15). They reveal the tender intimacy of recognition captured in the single, italicized use of "Hey," as the narrator picks up the phone, a sister expected to "discern" her brother's voice "from this one syllable" (p. 15).

And "... Thank you ...," his last words to the stranger who came to his aid as he lay dying on the highway, are recalled throughout book, encompassing "an entire life's meaning" (pp. 22, 23).

Making sense of death and its inherent loss is one of life's most challenging dilemmas. In Trailer Park Elegy, Hoogland's narrator summons her brother, speaks to him directly: "Know where I am, brother. Find me" (p. 83). She searches for words, "for something to work with," and even when they arrive, acknowledges their inadequacy, as (p. 61):

It would be interesting to know how Hoogland would respond to the questions she had put to herself: "What was the darkness that I claimed?" To this reader, what seemed clear, beyond the lyrical scope and beauty of the work, was every poet's awareness that in the end, there really are no words capable of encompassing the "immense and unknowable nature of death," [3] and the grief that follows.

Hoogland's narrator would seem to acknowledge this inadequacy: "[n]ot even a writer / alone at the edge of the sea is enough ...,";a writer who speaks "in dashes";as "water closes over / with a clap";(p. 41).

As David Chariandry writes in his award winning novel, Brother, there's also the reality that, however we choose to cope, "[s]ome deaths .... will never simply be 'gotten over.' Some mourners will never quite again 'be themselves.'" [4]

Would, however, that we could approach grief and mourning with Hoogland's poetic courage and grace. 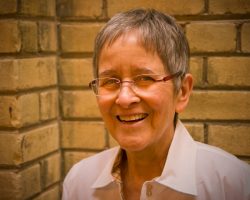 Mary Lou Soutar-Hynes is a writer, poet, retired educator and former nun living in Toronto. In 2009 she was a Fellow at the Hawthornden International Retreat for Writers in Scotland. She has published three collections of poetry, Dark Water Songs (Inanna, 2013), Travelling Light (Saraphim, 2006), long-listed for the 2007 ReLit Poetry Award, and The Fires of Naming (Saraphim 2001). Her fourth collection, Any Waking Morning, is forthcoming from Inanna Publications in the Spring of 2019. A Jamaican-Canadian, her work often draws on island imagery, while probing love, loss, and life's dilemmas. She's a founding member of an ekphrastic collaboration with Studio Artists from the Women's Art Association of Canada and the Long Dash group of poets. Her work has been published in journals, anthologies, and edited books in Canada, the UK, and the Netherlands.

Poet and dramatist Cornelia Hoogland is an expert at spinning fables, and nowhere is this more evident than in the earthy sexual tension exploding between a B.C. Wolf and a girl named Red. In a series of monologues, or victim reports, readers experience the rumbling, boiling interior of a teenage girl named Red who just needed one instinctual meeting on a crossroads in the woods to have her concealed interior explode through. In Woods Wolf Girl, we meet the Woodsman, a Cardinal Richelieu-type witch hunter, who pursues Red simply to point out her original sin. In contrast to the Woodsman, we meet the natural World, Wolf.

Wolf acts as the catalyst for Red's innate desires: "he shows her/ sapphire, the sky in fall/ when yellow poplars clap so loud/ you just have to look up./ Yes, she says,/ yes"; (16). For the first time in her life, the woods is released, and "it was [Red] doing the inviting"; (19).

Hoogland's lyrical narrative draws the reader through the meandering pathways of the woods, our natural, shared, feminist mythology of 'Red Riding Hood', and enables us to feel the cemented girl breaking through her social bars and becoming the food of the forest: "her mouth ripe as the berry bush"; (52).

This is an exceptional retelling of an age-old fable. Why do we repress our innate, natural selves? To what purpose, and for whom? As Red experiences a coming of age, realizing, "how [her] body has always wanted to be a basket of gifts,"; (27), readers will recognize this girl's future perception of the aging Wolf (and World) as just a man, "hoping to fluff up his hair"; (83).