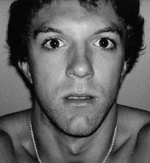 
Sean Horlor was born in Edmonton in 1981 and lived in Victoria for many years before making Vancouver his home. After earning a BFA from the University of Victoria, he worked in a number of public relations positions, including as a speechwriter in the Premier's office of British Columbia. He currently works in the public relations field in Vancouver. He also models and continues to write poetry and articles for a variety of publications. He has published his poetry widely in literary journals, including Arc, Event, The Fiddlehead, Grain, Pine Magazine, THIS Magazine, The Claremont Review, Inner Harbour Review, and The Malahat Review. His poem "In Praise of Beauty" won first place in This Magazine¹s 2006 Great Canadian Literary Hunt.

He wrote most of his debut collection, Made Beautiful by Use (Signature, 2007), in Queenswood Convent on southern Vancouver Island. His press material states, "In this tough, gritty, and innovative collection Horlor questions whether it's possible for anyone to be conscious, compassionate, and ethical in a twenty-first-century world.... Horlor's hagiographies, praises, and virtues are set in a milieu that is contemporary and streetwise, aware of homelessness, drug cultures, and sexuality." ISBN 1-897109-13-X, $14.95

Made Beautiful by Use (Signature Editions, 2007)