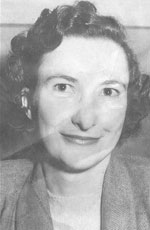 Born in Kelwood, Manitoba in 1917, Jean Howarth was one of four children of a Presbyterian minister. Raised in the prairies, Howarth chiefly wrote for The Vancouver Province in the 1950s. She is remembered for a column about the declining state of 'Good Samaritanism', reportage on the collapse of the Second Narrows Bridge and a chilling description of the last hanging at Oakalla prison farm of a young gay man in 1959. In 1960, the 'sob-sister' reporter moved to Toronto to become a staff reporter for the Globe & Mail. She soon rose to the position of assistant editor and became notoriously loyal to editor-in-chief Richard Doyle, serving as his unofficial chauffeur and writing in accordance with his political views. In 1963 she began her 20-year stint as a member of the editorial board, contributing influential but mostly anonymous opinion pieces throughout the 1960s and 1970s. Having being a part-time resident of Saturna Island on the West Coast, Howarth was later permitted to write a twice-weekly column on the editorial page about life on an imaginary Gulf Island she called Madrona. This fictional column called Treasure Island ran for eleven years, until 1989. It became the basis for Howarth's two compilations of connected stories about idyllic West Coast life. Journalist Don Hunter later produced a very similar column for The Province called Spinner's Inlet. Devoted to her newspaper work, Jean Howarth lived alone in an inauspicious house in Toronto's Beaches neighborhood. She died at age 87 in a Toronto nursing home in June of 2004.