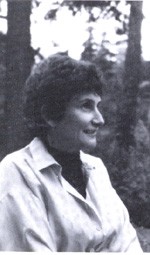 
Jeannette (Beaubien McNamara) Hughes of Sidney was born in Chemainus on December 29, 1938. She traced her family's francophone and Maillardville roots in Wilderness Dream: Glimpses of Pioneer Life in British Columbia (Victoria: Braemar Books, 1989). Her family history of the Beaubien clan, dating back to 1650 within Canada, concentrates on her father, Eugene Beaubien, a pioneer photographer, trapper and story-teller. In 1916, at age 16 he moved with his family from Maillardville to the Bridge River area to start a sawmill. In response to the book, her cousin Philippe de Gaspe Beaubien of TeleMedia Communications Inc. invited her and twelve people from different branches of the family to meet in Chicago and make a CD-ROM ("Family on Frontiers") tracing the family history back 400 years.

Hughes is a trained nurse who has been restricted to a motorized wheelchair due to multiple sclerosis. When she was diagnosed with MS, she had five children under 12 years of age, all of whom she raised to become independent adults. Her marriage collapsed but she was determined to remain active with a good sense of humour. She has written the bi-monthly newsletter for the Canadian Authors Association, worked as a researcher and writer for the Ministry of Health and taught at Camosun college. She remarried in 1986. A widow since 1996, she continues to be a driving force in her community. In 2002, she topped the polls with her second successful run for Sidney Town Council. Her video on scooter safety called Safety on Wheels, and an accompanying brochure, are distributed around the province. She has been active in Saanich regarding housing issues for seniors.