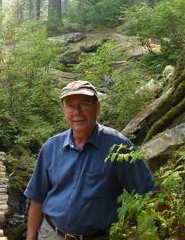 Both of Steve Hunter's first two novels begin and end at Big Lake. The names of the lakes are changed but the images are drawn directly from the place he has called home since 1991. As a columnist for BC Outdoors magazine, he has contributed works of short fiction that all depict life in the Cariboo.

Big Lake is a community of approximately 500 people, founded in the early 1900s. "Moose forage in our yard winter nights," he says. "Bears get into our deep freeze. Loons holler. We live on the lake so we kayak, swim and fish. We grow about half of the produce we eat and we know the people that raise our beef, raise our chicken, gather our eggs and grow our lamb."

"It kind of annoys me that 99% of the writings about the Cariboo/Chilcotin are from the perspective of European settlers," says Steven Hunter. "They're all about cowboys and ranchers and guides and outfitters. Sure it's history, and it's an alluring one, but there's another side not often told in a book."

Consequently, after working for thirty years as a social worker and supervisor with Aboriginal communities all over the province, Hunter wanted to write a story from an Aboriginal perspective, as a gesture of appreciation and respect.

The Cameron Ridge Conspiracy (2014) is a novel about a young Shuswap (Secwepemc) girl who witnesses the murder of her brother and sister at the hands of three miners in 1859 during the Cariboo Gold Rush.

The writing of The Cameron Ridge Conspiracy began in the first week of December, 2010, as he stood in his living room and watched the ice along the north shore of the lake inching its way outward, finally met in the middle, and the water was gone. "It's an awesome and inspiring spectacle," he says.

All of the Aboriginal places in The Cameron Ridge Conspiracy are real locations in the Cariboo and the BC Interior. Their names have been changed simply to not run afoul of the rich history of these places and the people who have deep roots to the past.

Silvercat Lake in the book is Big Lake. The fictional community of Burnt Cane, where there has been a winter village, is still exists as Sugar Cane (Williams Lake Indian Band). "The images and descriptions of these places are as accurate as I can get them," he says. "Anyone locally reading the story will know where they are and their real names."

Cameron Ridge is also an actual place, probably named after John Cameron, one of the few who struck it rich in the gold rush. It's a stunning and dramatic cliff, part of the fiord of Quesnel Lake. "I've stood at the place where the story climaxes," Hunter says.

With the exception of James Douglas and Matthew Begbie, all the characters are fictitious, and the story is fictitious, but Hunter adds, "Maybe it did actually happen. We'll never know. The history of Aboriginal people was an oral tradition, never written down."

Hunter's follow-up novel, Strings (2015) is about an aging musician who encounters sophisticated thieves engaged in violin fraud, theft, forgery, money laundering and all manner of deceptions in the trade of rare and valuable stringed instruments. In his second novel, the home base of the main characters is at Michelle Lake. It's really Big Lake and there is no shortage of scenes that draw on the wealth of natural images that Hunter encounters on a daily basis.

Many of the characters in Steve Hunter's first novel, The Cameron Ridge Conspiracy, set in the 1860s, reappear in his third novel, The Iron Promise (Riverside Press 2018). It begins in the winter of 1870 when smallpox has decimated aSecwepemc camp. The only surviors are a young Secwepemc woman, Rose Wilson, with her infant daughter, Olivia. Assuming she, too, will succumb, Rose begs two strangers passing by on the road to take her daughter, to save her life, and they consent to take the child. A day later Rider Valcourt, Olivia's father, finds Rose and takes her to the family ranch near Lillooet where she recovers. They make an "iron promise" to find their child. The story has dual narratives; one from the parents steadfastly searching for their child and one outlining the experiences of child who has lost her identity, her family and her culture. The Iron Promise takes the reader from the Cariboo across a new, young country, coast to coast, recounting courageous love and longing, commitment and the willfulness to never give up hope.