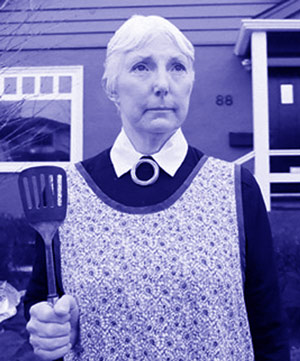 
Daughter of an underground coal miner in the B.C. Interior, Bobby Hutchinson was born in 1940. After a 12-year marriage that included three sons, one of whom is deaf, she worked various jobs until her abilities as a dressmaker enabled her to open her own boutique. After 12 years in business, she sold the shop and trained to run a marathon. During her training she imagined the life of Pheiddipedes, the first marathon runner, and submitted her story about him to a Chatelaine magazine story contest, winning first prize. She has since written and published more than 45 romance novels, starting with a heartfelt romance about a teacher of the deaf, and a coal miner who has a deaf son. Married and divorced a second time, she has been known to quote Dolly Parton: "Decide who you are, and then do it on purpose."

As a twice-divorced, sixty-something author of 45 published romance novels, and as someone who frequently asks her grandkids for advice, Bobby Hutchinson has humourously chronicled her experiences running a bed-and-breakfast in Sparwood, B.C., despite having never stayed in one before she opened it, in her memoir Blue Collar B&B (Langdon Street Press $15.95). "I was far too old for prostitution," she writes, "and it was the only other job I could think of which might net enough to pay the mortgage."