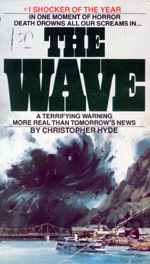 
Born in Ottawa in 1949, Hyde is a screenwriter and freelance investigative researcher whose thrillers are read around the world. Once dubbed a 'Paranoid Prince of Doom' in the New York Times, he wrote his first thriller in about a possible terrorism in British Columbia.

In The Wave (McClelland & Stewart, 1979) by Christopher Hyde, a crazed Vietnam veteran threatens to blow up the Mica Dam, thereby collapsing a downstream nuclear plant on the Columbia River, unleashing a radioactive wall 745 feet high, drowning cities and turning the Pacific Ocean into a veritable dead sea, etc. The bad guy forewarns the RCMP of the havoc with a phone call from UBC. "If you require proof of my actions, you can check the parking lot above Wreck Beach. I will be waiting below in the gun tower by the sea."

Before the villan is killed, The Wave features a conscientious CBC journalist named Halleran who says, "The whole Columbia thing was put together when W.A.C. Bennett was running the province. Wacky didn't give a buffalo chip about the Columbia Project... But you Americans were offering a lot of money for the Columbia, and Wacky wasn't the type to walk away from a dollar... Wacky took the money and signed the treaty. A few years later the chickens came home to roost and he actually had to build the dams... By the time he finished the dams, they'd cost four times what he'd paid for them." After writing The Wave, Christopher Hyde turned to fiction on a fulltime basis and moved to Ottawa in the 1980s, where his brother was writing mysteries.

As well as fiction, Hyde wrote The Paranoid's Handbook, a humourous and satirical look at contemporary trends and fears. Abuse of Trust is Hyde's hastily prepared 1991 study of UBC psychiatrist Dr. James Tyhurst who was convicted on five counts of sexual and common assault on female patients, then later released on an appeal. In the 1990s he was back on the West Coast, living in Point Roberts, Washington.