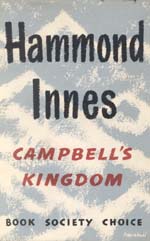 
Action writer Hammond Innes was born in Horsham, Sussex, England in 1913 as Ralph Hammond-Innes. He graduated in 1931 from Cranbrook School in Kent. He worked as a journalist at The Financial News (later to become The Financial Times) from 1934 to 1940. He married actress Dorothy Mary Lange in 1937. They never had children, and Lange died in 1989.

Innes' first novel The Doppelganger was published in 1937. Most of his 40 novels were bestsellers and many of his books, including The Lonely Skier, Campbell's Kingdom, The White South and The Wreck of the Mary Deare, were made into films. He served in the Royal Artillery from 1940 to 1946, and rose from gunner to major. During the war his books were serialized in the Saturday Evening Post. He was an avid yachtsman. Hammond Innes' The Last Voyage imagines what Captain James Cook would have written if he had been forthcoming and kept an uncensored diary during the final voyage that brought him to Nootka Sound in 1778.

Hammond Innes' adventure novel Campbell's Kingdom (1952) is set in Come Lucky, B.C., a fictional gold-rush town at the foot of the Rockies. Campbell is convinced oil riches lay untapped in the mountains. At his death, he writes to his grandson, Bruce Wetheral, in England. 'I pray God you will accept the mantle of my beliefs and wear it to the damnation of my enemies.' Campbell's grandson accepts the challenge, and emigrates from England to prove his grandfather's theory. The 1957 movie version of Campbell's Kingdom, directed by Philip Leacock, starred Dirk Bogarde. As Bruce Campbell, he arrives from England to accept his inheritance from his father, an absentee parent and a wild-cat oilman, only to discover his father, somewhat delusionary, had acquired oil rights to a huge area in the Rockies. Given only months to live by this doctor, the Dirk Bogarde character is going to leave for England when he learns that an unscrupulous water contractor named Owen Morgan (Stanley Baker) wants to flood the valley that is "Campbell's Kingdom". He fights to preserve the land and forgets that he is ill.

Also set in British Columbia, Innes' 26th novel, High Stand is a conventional adventure novel that was summarized by John Greenwood in Books In Canada: "At the centre is Tom Halliday, a financially troubled English heir to a valuable stand of B.C. timber, who suddenly disappears. When Philip Redfern, his young solicitor, discovers his client hiding in the Yukon wilds, it turns out that Halliday is trying to escape from a Mafia lumber company bent on acquiring his timber rights. To complicate matters, Halliday's father, who planted the trees, has laid a curse on anyone who allows them to be cut. And when the company thugs kidnap Halliday's wife, Miriam, the entire West Coast becomes the scene of a long and violent chase."

Anthologies with stories by Hammond Innes: