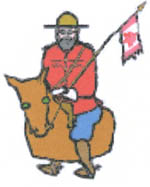 
James Jackson is a Vancouver Island author whose second novel is Justin Fowles (Jaxon, 2003). Fowles is an ex-undercover agent, confused patriot and geriatric lover, aging restlessly in Prospect, on the south coast of Vancouver Island. He's been banished from the RCMP, and thinks the nearby Combat College is an outpost of American expansionism. Fowles' world is turned upside down when he finds the murdered body of a young woman in Prospect Inlet. Jackson's first novel was To the Edge of Morning (Baxter, 1964), which was reissued in 2003 with the title Above Sumatra.