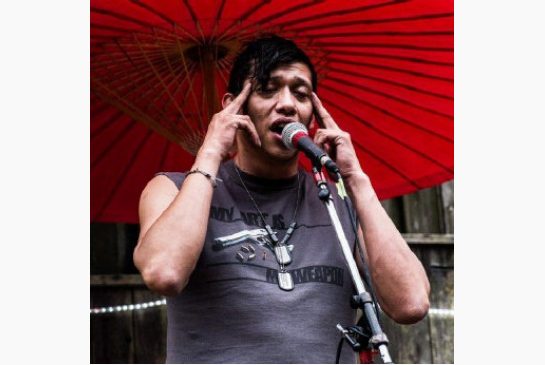 Here, in 2005, at this vegetarian restaurant, Zaccheus Jackson Nyce made his debut as a spoken word artist. A member of the Piikani (Scabby Robe) Blackfoot First Nation, he lived in an apartment overlooking Commercial Drive for the last nine years of his life, hosting gatherings for Canada Day and Christmas. The slam poetry event he entered proved to be his salvation until his tragic death in 2014. He would perform for Vancouver City Council, for Governor General Michaelle Jean, and for literary festivals across Canada, often receiving standing ovations. For decades Cafe Deux Soleils gained its reputation as a welcoming, literary venue and arguably the centre of Vancouver's diverse, spoken word and slam poetry movement.

ENTRY: Zaccheus Jackson was born in a Blackfoot community in Brockett, Alberta on September 10, 1977. He liked to say he was raised by wolves. From infancy, he was mostly raised in a Mormon household by his adopted parents, the Nyce family, in a home full of books. One of his earliest memories was hearing his father read The Hobbit to him. The Nyce family resided in both southern Alberta and Terrace, B.C.

After leaving Terrace, there was a five-year period when Jackson was a chronic drug user, mainly on the mean streets of Calgary, but also in Vancouver. He described his journey through addictions in many poems such as 'Blood Versus Water' and 'Domino's (Dominix Mix).' He also refers to dealing drugs in 'Chief'.

During his Vancouver period when he was mostly straight, an argument with his girlfriend sent him out for a walk when he spotted two words on a chalkboard outside Cafe Deux Soleils--Poetry and Slam.

"I had no clue what those words meant together," he said, "but I was angry. I felt like slamming something. And my head was full of poetry."

He went inside and discovered a poetry competition open to the general public. All you needed was an original poem of up to three minutes in length in order to gain points, ranging from zero to ten, from five judges chosen from the audience. It seemed simple enough. He competed and finished second, earning him a spot in a semi-final contest. That year he finished in the top four of the competition, earning him a spot on Vancouver's slam poetry team.

Jackson would subsequently compete as a team member for Vancouver's official poetry slam delegation six times, including 2007, 2008, 2012, 2013 and 2014-also winning individual poetry slam titles during his career including the Vancouver Individual World Poetry Slam Championships in 2007 and 2008.

Chris Gilpin, who managed the Verses Festival of Words, competed with Jackson on the same poetry slam team in 2007. "His artistic mission," says Gilpin, "was to speak about people whose stories would not otherwise be told. This is evident in poems like 'Domino's', 'Of Wings' and 'Chief'.

During his ascendancy as a poetry performer, Jackson travelled to Mount Baldy in California where he met Leonard Cohen. Thereafter he referred to his signed copy of Cohen's Various Positions as his "pseudo-Bible." [The name Zacchaeus--spelled with an 'a'--means pure or innocent in Greek, but the New Testament character of Zacchaeus, who appears only in the Gospel of Luke, was the chief tax collector in Jericho.]

According to Chris Gilpin, "Jackson was free of using hard drugs for 31 years. He only used for five." In Vancouver, once he became a fixture on the spoken word poetry scene, Jackson supported himself entirely from income gained from performances and poetry workshops. Self-described as an "an East-Van ghetto poet," he was reputedly encouraged to apply for a grant from the BC Arts Council but chose not to do so. One of his last performances occurred at the Festival of the Written Arts in Sechelt on the Sunshine Coast where he received yet another standing ovation.

Duncan Shields has compiled an internet archive of Jackson's poetry at this playlist of videos, available on the internet, and Gilpin's article in the Canadian Review of Literature can been accessed as an analysis of one of his shorter poems, 'Invicta,' "It's far more complex than a political rant," says Gilpin, who has also written an article about Jackson's poem 'City of Fingers' for Arc Poetry magazine.

Zaccheus Jackson died at age 36 when he was struck by a three-locomotive freight train, west of Toronto, near Runnymede Rd. and Dundas St., around 1 p.m. on Wednesday, August 27, 2014. Police treated his death as accidental, not as a suicide. It was later determined that a friend of his had shown him how to ride the slow moving rail cars and he had gone back to the tracks the next day to try it by himself, at which time he was struck by a fast moving train. Before he died, he posted a selfie on his Instagram showing him on the train tracks with a six-pack of beer. He called this photo "Trantrackssixpackriffraff." Such details are considered sensationalism by some members of the spoken word community when shown and repeated by media.

On August 28, 2014, approximately 100 community members walked from Vancouver's Aboriginal Friendship Centre to Cafe Deux Soleils in his honour. Hundreds filled the upstairs and downstairs of the WISE Hall & Lounge at 1882 Adanac Street in Vancouver for a memorial gathering soon thereafter on September 2.

Some quotes from Jackson's poems:

"My goal is to one day write a rhyme worthy of the lines etched beneath the eyes of the elderly."

"The fastest we live is still the slowest we die."

"God knows Columbus needed no Moses to split the sea of my red people. He knew enough to just trust in the strength of the steeple, the breadth and length of cathedrals, God's gospel-glossed needles."

"A bit more than eight years ago, I decided to exchange my pipe for a pen, reclaim my life once again, stop waiting for all the king's horses and all the king's men to give rise to the moment when this no longer defines me. Now that mind frame's behind me."