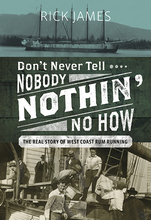 
Rick James has provided an authoritative overview of what really happened when B.C. boats ran liquor to the U.S. during Prohibiton Don't Never Tell Nobody Nothin' No How: The Real Story of West Coast Rum Running (Harbour 2017). ?We operated perfectly legal," said Captain Charles Hudson. "We considered ourselves philanthropists! We supplied good liquor to poor thirsty Americans ... and brought prosperity back to the Harbour of Vancouver.? $32.95 978-1-55017-841-8 2018

As the tenth title from the Underwater Archaeological Society of B.C. (founded in 1975), Rick James' Ghost Ships of Royston (2004 $15) is a collective history of the 14 hulks scuttled by the Comox Logging and Railway Company between 1936 and 1962 to create a breakwater for Royston's booming grounds on the east side of Vancouver Island. The most famous of these was the Cape Horn windjammer Melanope, launched in 1876 and long-rumoured to be cursed. As the ship was towed down the Mersey River for its maiden voyage, the ship's master discovered an elderly woman was on board, selling apples. She was promptly deposited onto a tugboat heading back to port, but she cursed the ship and all those aboard. Thereafter the iron sailing vessel had numerous problems until its hull was finally sunk for use as a breakwater at the Royston wharf in 1946.

A professional archaeologist and non-diving member of the UASBC, James has included a chapter on forest company breakwaters at Oyster Bay, Kelsey Bay and Powell River. He lives in Courtenay where he spent ten years researching his book. Rick James and Boomer Jerritt provided the photos for Paula Wild's The Comox Valley: Courtenay, Comox, Cumberland and Area (Harbour 2006). $34.95 1-55017-408-8.

In 2008, Rick James began investigating the loss of the American steamer Geo. S. Wright in January of 1873, thought to have gone down near Cape Caution. It required research into the Alert Bay area of that era, including the life of Alert Bay storekeeper Alden "Wes" Huson, the only person who was able to communicate with the First Nations people who had encountered the wreckage. British Naval ship that arrived to investigate the sinking refused to confer with Huson after the British captain saw an American flag flying atop his store. Huson, an ex-Yankee, was not allowed on board. As a result the fate of the Geo S. Wright remains a mystery. James' research is included in his book West Coast Wrecks & Other Maritime Tales (Raincoast Chronicles 2011 $24.95), including background as to how Wreck Beach got its name. 978-1-55017-545-5

Review of the author's work by BC Studies:
The Comox Valley: Courtnay, Comox, Cumberland, and Area
Raincoast Chronicles 21: West Coast Wrecks and Other Maritime Tales