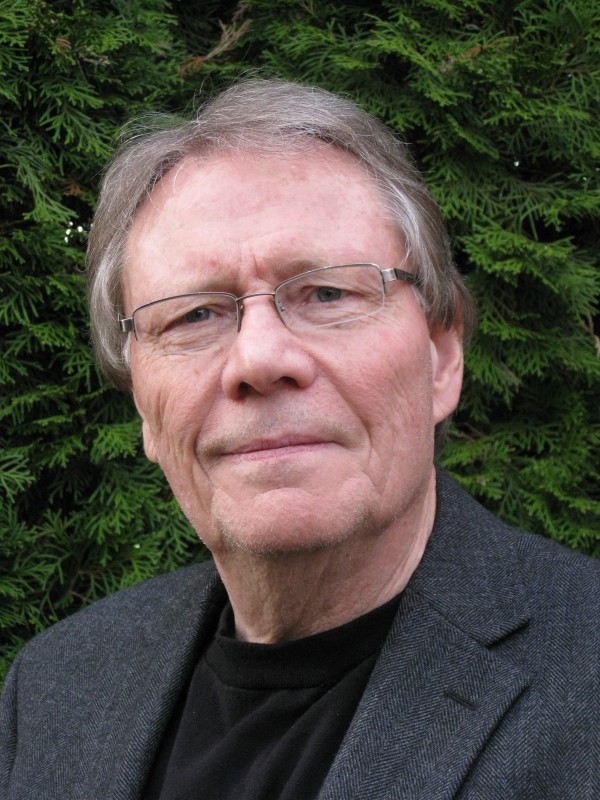 He first co-authored Gareth Wood's account of his unsupported journey to the South Pole with a British Expedition and then wrote a memorial volume about the collapse of the Second Narrows Bridge in 1958. It received the 2008 Lieutenant Governor's Medal for History Writing from the B.C. Historical Society in 2009. [See below]

Shortlisted for the George Ryga Award for Social Awareness in 2017, along with an Honourable Mention from the B.C. Historical Society for its annual history writing prize, Eric Jamieson's much-needed The Native Voice: The Story of How Maisie Hurley and Canada's First Aboriginal Newspaper Changed a Nation (Caitlin $24.95) recounts how Haida elder Alfred Adams, the founding president of the Native Brotherhood of British Columbia (NBBC), implored Welsh-born Maisie Hurley to carry on his work when he was dying of cancer in 1945. With $150 of her own money, Hurley started a The Native Voice newspaper as a catalyst for change, having already been a volunteer advocate for First Nations clients in court even though she did not have a law degree.

Hurley continued to serve as the unpaid publisher for The Native Voice after it became the official newspaper of the NBBC. The Native Voice was integral to the post-war fight for the right of First Nations people to vote provincially (in 1949) and federally (in 1960). For her dedication to improve the lives of "my people," Hurley was honoured through naming ceremonies in the Skeena, Squamish/North Vancouver and Comox areas.

Many noteworthy writers wrote for The Voice in addition to a number of politicians. Most importantly, First Nations leaders used The Voice as a platform for justice.

"The Native Voice was a paper intended to be written for First Nations by First Nations,"; Eric Jamieson wrote, in a letter to Alan Twigg, "and so the vast majority of the writers, besides Maisie who wrote an amazing amount of copy, were First Nations. Jamieson recounts:

All the leaders of the Brotherhood wrote for The Voice at various times. These included the Reverend Dr. Peter Kelly (probably the most prolific writer), from Masset, who was the Legislative Chair of the Native Brotherhood of British Columbia.

Then there was Andrew Paull, Squamish, who called himself a "lawyer without a ticket,"; because he was not able to practice law in the traditional sense. Regardless, he went on to have a noteworthy career defending First Nations causes and according to Maisie, "could quote cases chapter and verse.";

And then there was Chief William Scow, resident of the Brotherhood, and his son, Alfred Scow, Business Agent for the NBBC, who would go on to become a provincial court judge. Harold Sinclair, from Skeena, a VP with the Brotherhood, was a prolific correspondent, especially with respect to fishing issues.

Successive Brotherhood presidents, such as Robert Clifton and Guy Williams also contributed. Guy, was an especially talented communicator and was probably the closest to Maisie of all the NBBC presidents.

Constance Cox, from Hazelton, was another frequent contributor. She was close to Maisie and acted as her interpreter whenever she travelled north. She spoke many First Nations languages and was employed as a court interpreter.

Senator James Gladstone, the first First Nations individual to be appointed to the Senate (by Diefenbaker) was another occasional contributor via letterform. Maisie also introduced a young Six Nations man to her readers by the name of Jay Silverheels who played Tonto on the popular television series, The Lone Ranger.

Other notable contributors were Maisie's husband, Thomas F. Hurley, considered the dean of Criminal Law in Vancouver at the time and his protégé, Thomas R. Berger, who went on, during Maisie's lifetime, to champion the famous White and Bob case regarding hunting rights.

In addition to the above, the Voice hosted articles from numerous politicians.

Frank Howard (NDP MP for Skeena) was a frequent contributor and was an incredible advocate in Ottawa for First Nations people. He was constantly launching private members bills to grant First Nations the federal franchise, to remove barriers to alcohol, to amend the Indian Act etc.

In addition, let us not forget Frank Calder (NDP MLA for Atlin) who as First Nations himself, was a staunch ally of all First Nations causes in the province.

Some B.C. authors wrote for The Voice, as follows:

Hubert Evans wrote one story that was reprinted in the Voice. In the June and July 1948 issues, his story, Young Cedars Must Have Roots, was reprinted with permission from MacLean's Magazine. The story was prefaced by the remark that "The Indian Affairs Branch recommends this story to all teachers of Indian schools in Canada."; This story would serve as the basis for his important novel, Mist on the River (1954), about First Nations on the Skeena River.

In the July 1948 issue, Maisie asked Evans to write a bit about himself, which he did in letter form. Maisie reviewed his book, Mist on the River, in the November 1954 issue and Evans responded with thanks in the January 1955 issue.

Dr. R. G. Large, alderman of the City of Prince Rupert and author of "Skeena, River of Destiny,"; was an occasional contributor and always an advocate.

Rich Hobson, of the "Grass Beyond the Mountains";, "Nothing Too Good for a Cowboy"; and "Rancher Takes a Wife"; fame, wrote a story for MacLean's Magazine that was reprinted in the Voice in November 1949. The story was called "The Horse That Wouldn't Die.";

Hobson also corresponded with Maisie as follows: "It is with a great deal of pleasure that I give you permission to reprint "The Horse That Wouldn't Die"; In your splendid and courageous Indian monthly, "The Native Voice."; I have followed with great interest your fine work for the Indians. For many years as the Foreman of the Frontier Cattle Company, headquarters on the Upper Blackwater river, my best friends and pals were the Indians of the back country. In fact there were many months at a time when I saw only my Indian friends, and when I'd come out of the bush with a pack train for supplies, at first I had a hard time adjusting myself to the white man's humor and ways.";

Will Rogers, the famous American humorist, who was part Cherokee, wrote to Maisie in response to her sending him a couple of issue of the Voice. He said; "It is by long odds the largest Indian publication I have seen. We have nothing as good in the country.";

Paul St. Pierre, a Vancouver Sun newspaper reporter/editor, was occasionally quoted or his copy from the Sun reproduced in the Voice. When he worked for the Vancouver News Herald, he and Maisie dreamed up a spoof that had Chief William Scow become premier and take over British Columbia "from the whites."; It made all who read it, stop and think about the plight of First Nations in the province.

Buffy Sainte-Marie wrote an article in the Voice in the February 1964 issue (Maisie died in October of 1964) titled, "A Fresh Look at 'Reality."; This is a very powerful piece of writing from an educated and informed young woman who would go on to become a talented writer, poet, composer and singer. The piece was written in response to an article by Alvin S. Kelsey (Native Voice, May 1963) in which he stated; "The problem of the Indian is that he doesn't face reality.";

Buffy responded: "I have heard this tricky two-edged phrase countless times. Now I want to tell you what I think about facing reality and being an Indian."; She goes on to write; "In the first place, I do not believe there is such a thing as "the Indian."; She wrote that she knows Crees, Apaches, Tsimshian etc. etc. etc. but the individuals who "make up these tribes are as different from one another as salt is from sugar.";

I communicated with Ms. Sainte-Marie and she advised that although she didn't know Maisie well, "...The Native Voice was one of the few magazines of excellence around at the time who (sic) focussed on Native American people and issues.";

Review of the author's work by BC Studies:
Tragedy at Second Narrows: The Story of the Ironworkers Memorial Bridge


North Vancouver author Eric Jamieson revisits the worst industrial accident in the history of Vancouver with his new book, Tragedy at Second Narrows: The Story of the Ironworkers Memorial Bridge ($32.95, Harbour). Jamieson's book marks just over fifty years since the disaster. On June 17, 1958, the new bridge being built across Burrard Inlet collapsed into the flooding tidal waters of Second Narrows, killing eighteen workers. Photos of the two broken spans tilted into the sea went around the world and provided the city with one of its iconic historical images, still familiar to school children half a century later. The shocking thing was that the bridge was not an old, decrepit structure, but a new one just in the midst of being erected with all the support and security modern engineering could provide. That somebody had made a colossal error seemed obvious, but it would take a Royal Commission to discover how and why. Even then, some mysteries will never be solved.

Tragedy at Second Narrows unravels one of Vancouver's great mysteries with all the appeal of a gripping detective novel. Eric Jamieson has returned to the scene of the tragedy and reconstructed the tragic event with scrupulous care, introducing the entire cast of politicians, construction bosses, engineers and ironworkers who were involved; he relives those terrifying moments when the structure began to crack and drop like the bottom was falling out of the world. In the end, readers will have learned about the fascinating world of big-time bridge building and will be left with a clear picture of precisely how a great disaster took shape and plunged to its inevitable conclusion.

For over thirty years Eric Jamieson made his living as a banker, working around the province in Victoria, Campbell River, Prince George, Fort St. John, Vancouver and North Vancouver. He has served a total of eighteen years on the boards of museums, most recently with the North Vancouver Museum and Archives. Tragedy at Second Narrows is his second book; he is also the author of South Pole: 900 Miles on Foot. Jamieson lives in North Vancouver with his wife Joan.


Eric Jamieson's story of the collapse of the Ironworker's Memorial bridge in Vancouver, Tragedy At Second Narrows (Harbour, $32.95), has won first place, while Victoria author Stephen Hume's account of Simon Fraser's journeys, Simon Fraser: In Search of Modern British Columbia (Harbour, $36.95), has won third place in the British Columbia Historical Federation's annual Historical Writing Competition. Eric Jamieson's first place prize comes with a Lieutenant-Governor's Medal For Historical Writing and $600 in cash. The awards are given yearly to those BC authors who have made a significant contribution to the recorded history of British Columbia.


The Canadian Society of Civil Engineering annual Awards Banquet honoured Eric Jamieson with the W. Gordon Plewes Award for his book, Tragedy At Second Narrows, The Story Of The Ironworkers Memorial Bridge. Created in 1992 as the CSCE History of Civil Engineering Award and renamed in 1996 in honour of the late W. Gordon Plewes, author of the CSCE History Program, this award is given annually to an individual who has made particularly noteworthy contributions to the study of the history of civil engineering in Canada or the history of civil engineering achievements by Canadians elsewhere.


Eric Jamieson won the 2009 District of North Vancouver Heritage Advocacy Award for Tragedy at Second Narrows, The Story of the Ironworkers Memorial Bridge.