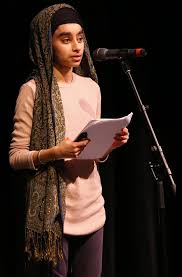 
Writer, illustrator and spoken word artist Jasmin Kaur's debut collection of poetry, prose and illustrations, When You Ask Me Where I'm Going (HarperCollins 2019) explores what it means to be a young woman living in a hostile environment where her voice isn't often heard. Issues explored include sexual assault, mental health, undocumented immigration, love and liberation. It isn't until halfway through the book that one of the protagonists, Kiran, a young Sikh woman living in the Punjab is introduced. She becomes pregnant after being raped by her fiance's brother. When her fiance and family don't believe her, Kiran leaves India for Canada in order to raise her child as a single mother. She bears a daughter, Sahaara, who arrives home one night to find her mother being arrested as an undocumented immigrant. With no other family in Canada, Kiran can only look to her daughter for help.

Jasmin Kaur uses her writing to delve into feminism, womanhood, social justice, healing and reclaiming identity. As an arts facilitator and fourth-grade teacher she has led creative workshops for young people across North America, the United Kingdom and Australia. Her work has been celebrated by celebrities such as Jennifer Lopez and Reese Witherspoon. She has been featured in Harper's Bazaar India, the Huffington Post and other publications. She lives in Abbotsford.