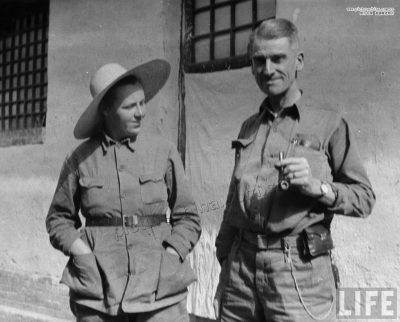 A commentary by Larry Hannant:

Among Westerners in China, Jean Ewen knew Bethune better than anyone. She travelled with him for five months, across the Pacific beginning in January 1938, then on a marathon exodus from south to north China, pursued by the Japanese air force and army for much of it.

The two shared gruelling hardships, among them trekking on a mule caravan carrying medical supplies to the Eighth Route Army in Yan'an.

The pair also shared exhilarating highs, notably conversing with Mao Zedong through a long night immediately after their arrival at the remote headquarters of the Chinese Communist Party.

Unlike Bethune, Ewen had an excellent command of Chinese. Her manuscript recollection about that time is a fascinating portrayal of the terrible privations imposed on China by centuries of feudal backwardness and by the assault of one of the world's foremost military powers of the day on a poor and poorly-armed country.

After more than a month of frustrating and exhausting travel, during which they were reported dead, they reached Xian. Bethune had been morose through times of enforced delay as they waited for a lull in the Japanese attack that would allow them to cross the Yellow River. In Xian, he was revived when he found kindred spirits in one of the founders of the Communist Party of China, Lin Beiqu, and the redoubtable General Zhu De. They were soon immersed in animated plans for hospitals in the front-line region of Wutaishan.

For her part, Ewen found a different release. She went shopping. Sick of her filthy uniform, she roamed the town, found a hairdresser and some cosmetic shops, then set out to buy a dress. She returned to their barracks wearing her prize, which she described in detail in her handwritten memoir and the published version, China Nurse: "a long blue sheath -- Chinese style with a lace petticoat whose gossimer [sic] scallops peaked out of the slit on each side of the long skirt ..."; Under the circumstances, Bethune's reaction was perfectly understandable, but it cut her deeply and confirmed for her his insensitivity: "Where the hell did you get that rig -- it's rather out of place.";[21] Bethune was baffled by the daughter of a prominent communist being, as she herself proclaimed, so bourgeois.[22]

The frequent quarrels between her and the man she later disparaged as "Big Norman"; revealed much about their different orientations. She was resentful of his single-minded dedication to the wounded -- during the trek from Hankou to Yan'an he used up their entire store of supplies, mostly treating hordes of ill and wounded civilians. Bethune seemed to be unperturbed that the Japanese were often perilously close, and, to the chagrin of Ewen and the caravan master, carried on attending to civilians, saying "never mind, we'll make it.";[23] She took this at first to be evidence that he was "a doctor first -- concerned only with the person who might be sick or wounded. ... I assumed that somewhere under this obsession there was a human being. Later I wondered even about this.";[24]

Perhaps more galling to her were his communist convictions -- he once gave her "a lengthy discourse on the virtues of [Communist Party of Canada leader] Tim Buck"; -- and the fact that "he kept hitting me over the head with my father.";[25] Tom Ewen's loyalty to the CPC, which made his family "merely bystanders to the part he was playing in history,"; was still a raw scar on his daughter's heart.[26]

Ewen could give as good as she got. She confided to Bethune biographer Roderick Stewart that "I learned early to talk back to men -- especially self-styled revolutionaries.";[27] And just as he sent her into convulsions with mention of her father, she -- inadvertently or by astute insight into his life-long torment -- bitingly observed that Bethune was "nothing but a bloody missionary."; No words could more stingingly have invoked for him the horrors of his missionary mother, whom he called "the dragon"; and "a hellion.";[28] Predictably, he poured scorn onto Ewen for that taunt.

While the two travellers sparred over the other's perceived and real weaknesses, like any couple on a road-trip from hell, they ultimately came to admit to a grudging admiration. Bethune, who was imbued with that era's "doctor knows best"; prejudices, paid her the highest compliment that he likely could envision coming from a surgeon. After two days of continuous surgery at Yan'an, Bethune took her aside and said "Nurse, I take back everything nasty I have said to you about your work, you are an excellent scrub nurse.";[29]

His lengthy despatches to Canada also consistently praised Ewen. Curiously, Bethune's apology is recorded in her manuscript but didn't make it into the published version of it, China Nurse. What did survive was his warning to her never to refer to him by his first name and not to offer a diagnosis of any patient's ailment.[30]

Bethune lived with Ewen longer than he had with any other woman except Frances. Although theirs was never an intimate relationship, hardship and danger welded them closer together than might have been seen even between husband and wife. And in her manuscript and her subsequent correspondence with Roderick Stewart she was utterly candid.

Thus, her observations on two significant aspects of his character hold considerable weight. These were his drinking and his reputation as a womanizer. In a letter to Stewart in 1971, Ewen referred specifically to the scandalous stories attached to him. While proclaiming him to be "a lady's man"; at whom women threw themselves (where she observed this is not stated), she took pains to add that, "he was never debauched either with women or alcohol as far as I knew him in and on the way to China.";[31]

by Larry Hannant for Ormsby Review

Jean Ewen (December 24, 1911 - 1987) was born in Scotland and immigrated with her family to Saskatchewan as a child. She studied nursing in Winnipeg and went to China in 1932 where she worked with Franciscan Fathers and learned Mandarin. After a return to Canada in 1937, she accompanied Norman Bethune to China as his interpreter and assistant, helping him undertake front-line surgeries in horrific conditions. She also trained nurses and taught sanitation, earning a Silver Shield award from the Chinese government. She visited Hong Kong during her return to Canada and soon married John Kozar, a friend of her two brothers when they had all served in the Spanish Civil War. The had two children, Laura and Tom (though Laura was conceived while Ewen was still in China, and was born just after Kozar and Ewen were married. Kozar was killed when his ship was sunk in 1942. Ewen married Mike Kovitch in 1946, with whom she had a third child, Michael. China Nurse, Ewen's memoir, was published in 1981. In later editions, it was called Canadian Nurse in China. Ewen died in 1987, and her ashes were returned to China in 1988.[4]