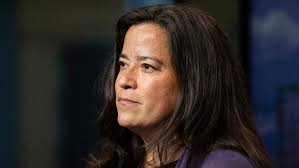 
Also known by her initials JWR and by her Kwak'wala name Puglaas, Jody Wilson-Raybould was serving as the Independent Member of Parliament for the riding of Vancouver Granville when she published her first book, From Where I Stand: Rebuilding Indigenous Nations for a Stronger Canada (UBC Press, 2019), an edited collection of her speeches and lectures made over a ten-year period. She served as Minister of Justice and Attorney General in the Liberal Party cabinet of Justin Trudeau from 2015 until January 2019 and then as Minister of Veterans Affairs of Canada from January 14, 2019, until resigning on February 12, 2019.

Wilson-Raybould followed up with Indian in the Cabinet: Speaking Truth to Power (HarperCollins $34.99), a memoir charting her journey from her home community, Cape Mudge, B.C., to Ottawa as Canada's first Indigenous Minister of Justice and Attorney General. She shares why she got into federal politics, her experience as an Indigenous leader at the Cabinet table, her proudest achievements, the SNC-Lavalin scandal and how she moved forward. Before entering federal politics, Wilson-Raybould was a provincial Crown Prosecutor in Vancouver, a Treaty Commissioner and Regional Chief of the B.C. Assembly of First Nations. Wilson-Raybould studied at the University of Victoria and later at the University of British Columbia. She lives with her husband Tim Raybould in Vancouver.