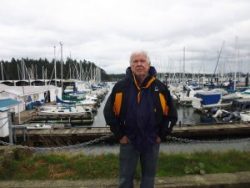 
Prairie-raised ex-fisherman and yacht salesman Joel Scott of Chemainus has crafted his second contemporary, sea-faring, adventure novel, Arrow's Fall (ECW $18.95), as a follow-up to his 2018 debut with Arrow's Flight set off the coast of Mexico. Next spring his contemporary hero Jared Kane -- orphaned at a young age, raised by strict Christian grandparents on a farm, spent two years in jail on a trumped-up assault charge, father to a half-Haida son - will set sail for the dangerous waters of the Great Sea Reef of Fiji, lured by a sunken 18th century ship laded with gold. A life-and-death sailing battle ensues with ex-marine Lord Barclay and his crew of mercenaries about the 240-foot Golden Dragon. Scott is a two-time winner of the Cedric Literary Award.